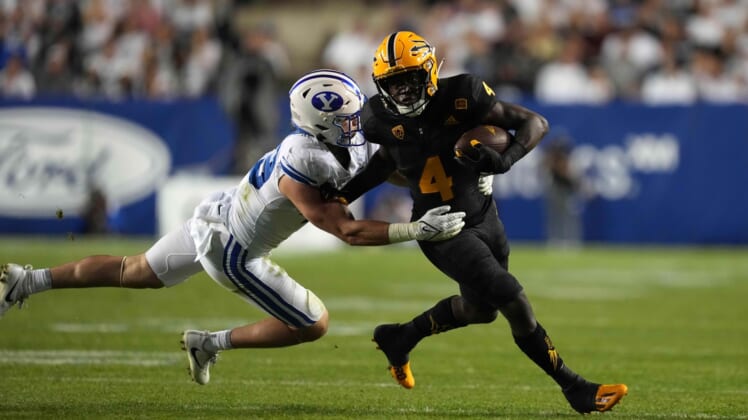 Utah continues to endure a challenging season in a variety of ways, both on and off the field.

The Utes’ off-the-field challenges are going to linger all season. Their next obstacle on the field comes in the form of No. 18 Arizona State, which visits Salt Lake City for a Pac-12 matchup on Saturday night.

After winning its last two games, Utah (3-2, 2-0 Pac-12) finds itself a half-game behind Arizona State (5-1, 3-0) in the Pac-12 South Division. However, the story of the Utes’ season to this point unfortunately is one centered around tragedy.

Utah safety Aaron Lowe was shot to death at a postgame party on Sept. 26. Nine months earlier, Utes running back Ty Jordan died as a result of an accidental gunshot wound. The team traveled to Texas on Monday to attend Lowe’s funeral.

Two days earlier, on Saturday night, Utah visited USC and knocked off the Trojans 42-26. The Utes scored 35 of the first 45 points and held on for their second straight win following a crushing overtime loss to San Diego State.

“To see just their sheer enjoyment, and that’s the best way to describe it, they obviously had Ty and Aaron on their mind, and it’s gonna be a constant the rest of the season,” Utah coach Kyle Whittingham said after the win over USC. “But to see them have the success they had tonight was great, and I think this team needed that. I know they did.”

Arizona State coach Herman Edwards has taken note of the way Utah’s coaches and players have handled a difficult campaign.

“I can’t speak for them or their situation, but I have been in situations like this as a former player with teammates,” Edwards said. “It brings a different side to it. I think it brings a lot of reflection. I think they’ve done a great job through this. Today hopefully they’ll have some closure to it. Coach (Whittingham) has done a good job of being a voice, speaking to young men. That’s important. I think they have handled it well.”

Cameron Rising threw for 306 yards and three touchdowns in the win over USC, which certainly caught the eye of Arizona State in its preparation for this week’s contest. The Sun Devils have allowed 14 points or fewer in four of their six games and held Stanford to 13 rushing yards in a 28-10 triumph last week.

“When you run for 200-plus, you’re going to win a lot of games,” Edwards said. “It was fun to watch the runners run.”

On the other side of the ball, Arizona State defensive end Tyler Johnson was named the Pac-12 defensive lineman of the week after recording five tackles, 3.5 tackles for loss and two sacks against Stanford.

Utah has won 15 of its last 16 home games, including a 21-3 victory over Arizona State in the last meeting between the teams in 2019.