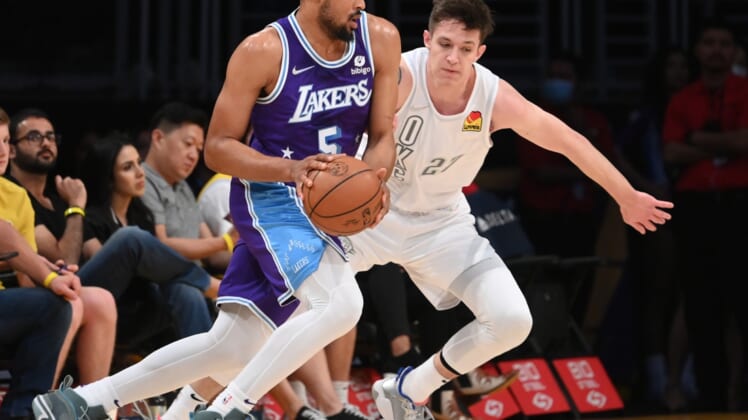 Stanley Johnson scored 21 points and Wenyen Gabriel added 16 as the Los Angeles Lakers earned a 120-101 victory Friday over the visiting Oklahoma City Thunder with their stars watching from the bench during the home finale.

LeBron James (ankle), Anthony Davis (foot), Russell Westbrook (shoulder) and Carmelo Anthony (non-COVID illness) all were out for the Lakers. It was announced earlier Friday that James would not play in either of the final two games of the season.

Dwight Howard and Talen Horton-Tucker each had 15 points for the Lakers, who ended a season-long eight-game losing streak and won at home for the first time since March 11. Los Angeles was eliminated from play-in tournament consideration with a loss Tuesday at Golden State.

Jaylen Hoard scored 27 points with 17 rebounds for the Thunder, while Georgios Kalaitzakis added 25 points as Oklahoma City used just six players. The Thunder lost for the fourth time in their past six games and will remain in Los Angeles to close out their season Sunday against the Clippers.

The Thunder led by as many as seven points just over nine minutes into the game and had a 28-27 lead after one quarter. The Lakers came back to lead by nine points in the second quarter and took a 56-52 lead into halftime. Hoard had 17 points for the Thunder to lead all scorers.

The Lakers led 90-82 after three quarters and took their first double-digit lead at 92-82 with 11:40 remaining before cruising home with the victory.

Mason Jones had 13 points for the Lakers, while Austin Reaves scored 11 and Wayne Ellington scored 10.

Melvin Frazier Jr. had 16 points for the Thunder, while Isaiah Roby scored 14 and Zavier Simpson scored 13.