The Los Angeles Lakers have a giant Russell Westbrook problem on their roster for next season, and they may look to solve it via the waive and stretch provision.

Without a doubt, Westbrook is not playing to the level of a former league MVP who once averaged a triple-double for a season. Combining him with Lebron James and Anthony Davis has led to one of his worst seasons and the team has been a disaster that won’t even make the playoffs. However, there is serious debate on if the fourteen-year veteran is done as an elite player, or is in a system that’s a poor match for his world-class talents.

Yet, it may not be a performance that makes Russell Westbrook untradable, but instead the massive $47 million he is set to make next season. The NBA salary cap forces teams to match up money when making trades, and few teams can match that kind of money and offer a return the Lakers would want. However, the franchise is actually considering a different but realistic option.

NBA insider Mark Stein took to his Substack page Thursday and revealed that the Lakers are considering waiving the nine-time All-Star by way of a stretch provision. It would force the team to have to pay a player not on the roster over $15 million a year over the next three seasons. However, it would bring them under the luxury tax and allow them to re-sign a player they do want long-term in Malik Monk.

Assuming they go this route, and they most likely will have to, here are three teams that would be ideal fits for Russell Westbrook this summer.

New York Knicks get the point guard they desperately need

The New York Knicks have needed a true blue star point guard for the better part of the last 50 years. However, maybe now more than ever they could use a player like Westbrook. In 2020-2021, the team flourished when Derrick Rose was able to recapture some of his peak Chicago Bulls form in being a ball handler with the ability to go to the basket and make plays for teammates. 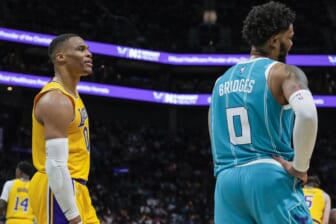 Also Read:
Charlotte Hornets ‘team to watch’ for Russell Westbrook trade this offseason, how it might look

Westbrook could do the same and then some, even at 33. Also, he would give the Knicks a bonafide lead scorer and could take the pressure off embattled star Julius Randle. While the New York and LA media offer up similar pressure, the Knicks roster is one that would allow Westbrook to play to his strengths and put the ball in his hands often.

Last season’s MVP Nikola Jokic is a one-man show for the Denver Nuggets. He is almost like a 7-foot version of Westbrook in his ability to fill up the stat sheet for his team. There is no doubt that the Serbian has taken the Nuggets back to prominence, but he needs some help.

Related: Get the full rundown of the NBA games today

Westbrook would offer a top-shelf secondary scorer, another elite ball-handler, and a Westbrook-Jokic pick-and-roll combo would be very interesting. While the Nuggets would not have traded for the point guard and his massive contract, signing him on a far more affordable deal to give them the upgrade they need in the backcourt is the ideal situation.

It is unclear what Zion Williamson’s future will be with the New Orleans Pelicans. Whether he stays or goes, Westbrook would be a major benefit to the Pels. Fans saw how good Westbrook and Bradley Beal could be at times in Washington. A Westbrook and CJ McCollum pairing in New Orleans could be dynamite. 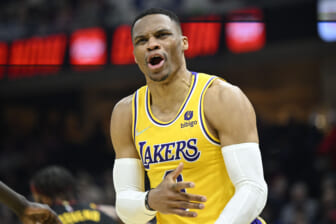 McCollum knows how to play with a star ball-handler, so there shouldn’t be fears of chemistry issues with Westbrook. If Williamson stays, there is a lot of upside in a Westbrook-McCollum-Williamson trio. If not, get a trade return that best fits the All-Star Westbrook and McCollum duo.