Russell Westbrook doesn’t have any answers for the Los Angeles Lakers’ poor play over the last month and is pretty tired of being asked about it.

Westbrook having debates with Lakers beat writers about how the team’s disappointed this season has become somewhat of a regular occurrence. Especially in the second half of the season as they have plummeted in the Western Conference standings and sit just outside the playoff race with a 31-44 record.

However, the media has to do their job in informing the public of the latest opinions from the Lakers’ premier players and did so again on Tuesday night after the team lost their third straight in falling to the Dallas Mavericks 128-110.

With fellow All-Stars Lebron James and Anthony Davis out of the lineup, Westbrook starred in a near triple-double performance while also being a -25 for the team while on the court. Following the game, he was asked if falling to the eleventh spot in the conference would lead to any changes to attempt to address the team’s dismal fortunes of late. Surprisingly — or maybe not — Westbrook stated that falling another slot in the standings would not lead to notable strategic or lineup adjustments.

Obviously, tired of getting similar questions for the last month as the team has lost 13 of 17, Westbrook decided to inquire about what the media member felt would be a way to fix things. That question was simply answered with, “winning.” A response Westbrook was not a fan of, as he rolled his eyes and said, “That’s obvious. What do you think should change?”

When the media member explained they are not a professional basketball player and were just doing their job in trying to inform their readers, Westbrook stormed off from the press conference desk and then asked before exiting, “You have the answer to winning?” 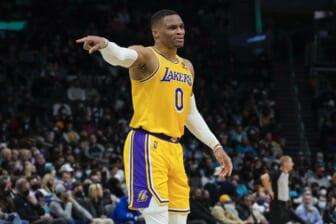 Westbrook and the writer would have a conversation about winning in the NBA and the sad facts that the nine-time All-Star had no answers to offer and the writer is just, well, a writer and not a Lakers player or coach. Fortunately, the confrontation ended on a positive note and the point guard joked if fellow team media had caught the conversation on video.

The Lakers return to the NBA games today schedule tomorrow to face the Jazz in Utah at 10 PM ET.