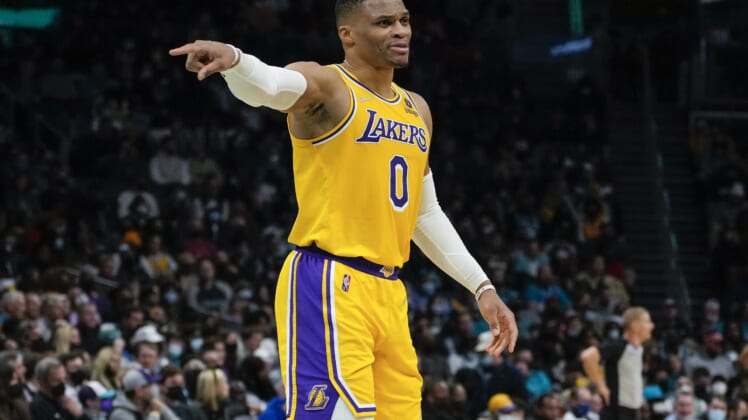 Russell Westbrook and his Los Angeles Lakers were struggling again in the first half of their game against the Minnesota Timberwolves Wednesday evening.

At 29-39 heading into the game, Los Angeles found itself down by 21 points at the half.

For his part, a two-play sequence from Russ in the first half seemed to define what he has provided for the Lakers in the former NBA MVP’s first season with the team. Nothing.

Let’s check in on the video before breaking it down some with help from the legendary Rob Perez.

The first end of the sequence shows Timberwolves guard Patrick Beverley hustling for a rebound after a miss from teammate Malik Beasley. All the while, Westbrook is just standing out on the perimeter as if he’s checking his Instagram page or something. Beverley ultimately scored on the rebound to put Minnesota up by 18.

On the other end of the court, Westbrook had the ball near the top of the key with no one in spitting distance. Instead of taking the shot, the struggling guard attempted to pass it inside to LeBron James. It was stolen.

This sequence is just brutal from Westbrook. Absolutely brutal.

We’re not even sure what to focus on here. The lack of hustle from Russell Westbrook on defense or the ultimate show of disrespect from Beverley as he left the guard wide open.

Following the play, Beverley was seen running down the field, mouthing “he’s trash” while holding his nose. Seriously, it’s something that happened.

Westbrook would finish the first half with seven points on 3-of-7 shooting with the Lakers minus-10 when he was on the court.

It’s been noted on a near never-ending loop that Westbrook has no future with the Lakers. They are going to do everything possible to rid themselves of the veteran guard and his bloated contract. For good reason. Westbrook has been terrible all season. That’s also been magnified recently.

As for the Lakers as a whole they entered Wednesday night’s game having posted an 8-20 record in their past 28 games. As of right now, they are only 2.5 games ahead of the Portland Trail Blazers for the 11th seed in the Western Conference and could miss out on the play-in tournament altogether.