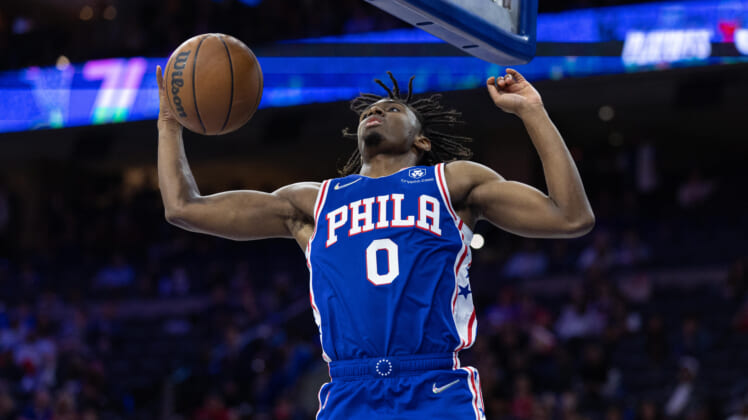 Since being drafted by the Philadelphia 76ers in 2020, Tyrese Maxey has been an avid supporter of the community in Philadelphia. This past March, Maxey, along with Danny Green, donated to the Black Women in Sports Foundation. The BWOS is an organization aiming to get more women of color involved in the sports world. Maxey has also since hosted his own camp that he called the “1% Skills Camp”. One of these camps was held in Philadelphia on Saturday, August 6.

Maxey got off to a slow start in the game. However, he would quickly settle down and start to show off his NBA abilities. Every bucket that Maxey scored would get a reaction out of the crowd, including a near half-court shot that he drained.

After some very flashy moves and a few impressive deep balls, Maxey finished with 21 points at the end of the first half.

Before the start of the second half, when asked how many points he would drop, Maxey responded with: “Imma drop a quick 40 and get up out of here”. He said so with a smile on his face, ready for another half of basketball.

It was clear that Maxey wasn’t going as hard in the second half as he was in the first, presumably because they were up over 20 points to start the half. Nonetheless, Maxey still had himself a solid second half. He displayed more of his flashy moves, continuing to put on a show for the fans in the crowd. While Maxey may not have finished with 40 points as he said he would, he still managed to score a game-high 34 points. To make this even more impressive, he did so while Marcus Smart scored 29 points.

Isaiah Joe gets in gear

Tyrese Maxey wasn’t the only Sixer to play well in this championship game. Isaiah Joe also showed off some of his NBA talent finishing with a quiet 16 points. Joe barely saw the ball to begin the game, but once he managed to get more touches, he found his rhythm. Joe had a nice three-pointer off of a Maxey assist, making this look like a Sixers game for a quick moment. Joe also threw down an impressive dunk to go along with a few more deep balls.

The duo of Maxey and Joe put a lot of smiles on people’s faces, including the youth of Philadelphia. Giving these young fans an opportunity to see NBA talent is what these pro-am games are all about. Everyone may not be able to afford tickets to an actual NBA game, so these can be once-in-a-lifetime moments for some people. Maxey touched on this in a post-game interview.