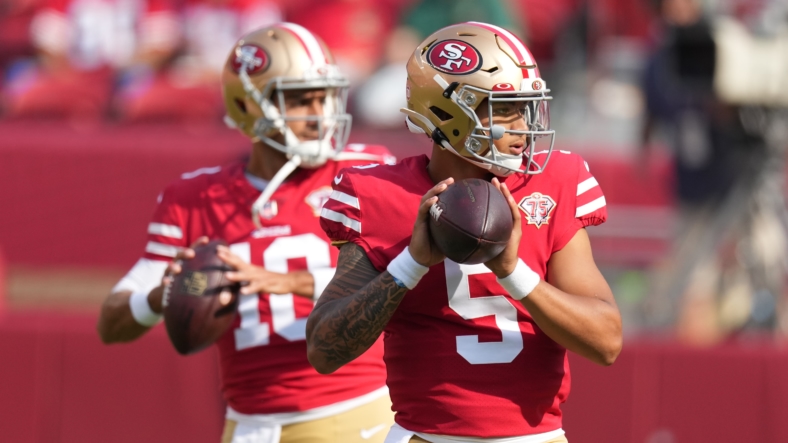 Trey Lance will be the San Francisco 49ers’ starting quarterback for the Week 1 opener, but the return of Jimmy Garoppolo sparked debate about the organization’s faith in Lance. It also reportedly struck a nerve with the second-year passer right before the regular season.

Lance is the new face of the 49ers’ franchise, but it hasn’t been a smooth transition. San Francisco entered the offseason confident it could trade Garoppolo to a quarterback-needy team, offloading his contract and picking up Day 2 picks to strengthen the roster. Instead, Garoppolo will be backing up Lance on Sunday.

It’s the direct result of a trade market that quickly evaporated. Recovering from offseason shoulder surgery meant no team wanted Garoppolo until he could throw and every vacancy was filled during that time. Facing few alternatives, San Francisco restructured his contract to ensure his return came with a lower cap hit.

According to Albert Breer of Sports Illustrated, Lance was a bit annoyed by the organization’s decision. He knows he remains the starting quarterback and the franchise made a decision in its best interests, but keeping Garoppolo on the roster seemingly irritated a player the 49ers want to build around.

If Lance meets the expectations the coaching staff has for him this season, there’s no reason to worry. He’ll be leading one of the best teams in the NFL and fans won’t even think about demanding a quarterback change. However, the preseason showed that he is still learning to play at the highest level and inconsistency for too long could force the 49ers to make a difficult decision.

That’s precisely why the 49ers kept Garoppolo and is why Lance didn’t love the move. There is now a player behind him who can be perceived as a threat to his job, forcing unwanted questions after one bad game or providing fans with fuel to demand Kyle Shanahan benches Lance.

San Francisco made the right decision and there remains a chance it can trade Garoppolo during the season if another contender loses its starting quarterback. Until that time comes, Lance must learn to handle the growing pains of being an NFL starter while handling the pressure of knowing there is a player behind you on the depth chart who could step in and take the job if struggles persist.