The Atlanta Hawks will sign star guard Trae Young to a max contract extension once he becomes eligible at midnight eastern Tuesday morning.

According to Jeff Schultz of The Athletic, Young is expected to agree to the extension shortly after midnight. The deal will be worth $168 million over five seasons.

To say that the 22-year-old Young has more than earned this would be an understatement. This past season saw him average 25.3 points, 3.9 rebounds and 9.4 assists en route to leading the Hawks to a shocking appearance in the Eastern Conference Finals.

From a financial perspective, it makes perfect sense for Trae Young to sign this extension now. The former No. 5 overall pick is playing under a four-year, $26.53 million rookie contract. He’s still only 22 and would be able to hit free agency while the star guard is in his prime.

For the Hawks, it also makes sense. However, this does create some financial hurdles for general manager Travis Schlenk. That’s where we start when looking at the financial impact of this soon-to-be signed extension.

It’s been a long, drawn-out process between the restricted free agent and his team over the past calendar year. Collins has been demanding a rookie-level max contract extension. The Hawks have pushed back against this at every turn. 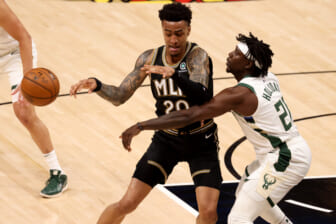 “They’re worried he’s getting maxed, and they’re putting it out there they are willing to pay him if he gets a max but won’t be thrilled about it,” an Eastern Conference executive told ESPN’s Tim Bontemps in March.

After extending a qualifying offer to Collins, Atlanta gave itself some flexibility here. It can match any offer made to the star forward. It can also attempt to pull off a sign-and-trade for more assets. Collins, 23, is eligible to a sign a four-year, $125 million contract. He averaged 17.6 points and 7.4 rebounds for the Hawks a season ago.

This is another issue. Atlanta is definitely worried about the payroll. It also has a ton of young wings, some of whom could be moved for other assets. The acquisition of backup point guard Delon Wright from the Sacramento Kings in a three-team trade adds another layer to this. It’s now rather clear that Schlenk and Co. might be reinventing the roster to an extent behind Trae Young.

This could very well include moving off of one of the Hawks’ 2020 free-agent signings in that of Danilo Gallinari or Bogdan Bogdanovic. Meanwhile, 2019 lottery pick Cam Reddish has clearly been on the block over the past couple weeks.

The interesting dynamic here is that Atlanta is not far off from having to consider signing young wings De’Andre Hunter and Kevin Huerter to extensions. Both are slated to become restricted free agents next summer. Obviously, Young’s extension and what happens with the other players mentioned above will play a role in Atlanta’s decision-making process here.