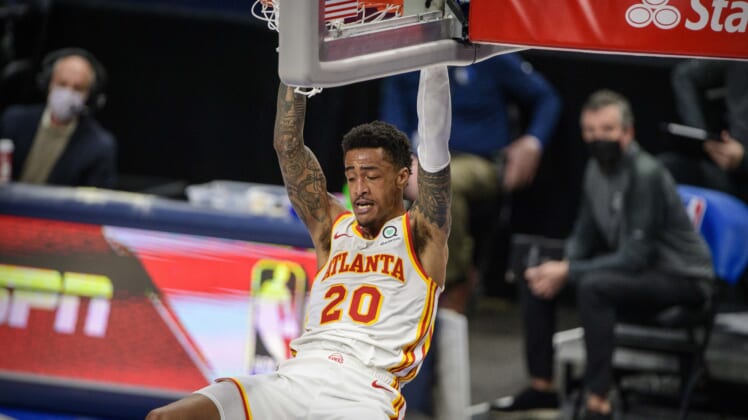 The Atlanta Hawks are apparently facing a two-week deadline to pull off a John Collins trade. The star power forward is slated to hit the restricted free agent market this coming summer after he turned down a $90 million extension offer from Atlanta last offseason.

In turn, the Hawks are reportedly willing to deal the young 23-year-old forward. It makes sense with Atlanta facing the possibility of losing Collins for nothing in free agency. In the midst of a rebuild and attempting to find running partners for Trae Young, the Hawks can’t afford for that scenario to come to fruition.

It now looks like something could happen on this front soon.

According to ESPN’s Brian Windhorst, the Hawks have received a “steady stream of calls” as it relates to a potential trade for Collins. Previous reports concluded that Atlanta was looking for a lottery-level pick in return for Collins.

Collins, 23, has proven himself to be a dynamic option on offense with fellow young star Trae Young in Atlanta. Thus far this season, he’s averaging 18.0 points and 7.6 rebounds on a robust 54% shooting from the field.

This comes on the heels of the former first-round pick averaging a split of 21.6 and 10.1 on 58% shooting last season. He’s also become somewhat of a three-point threat over the past couple seasons, shooting a combined 40% from distance.

On the surface, it seems like Atlanta would be smart to retain Collins. Unfortunately, the team refused to offer him a max-level rookie extension last offseason. That has led to the power forward being put on the trade block.

What teams have the best chance of pulling off a blockbuster John Collins trade?

That’s the biggest question with the 2021 NBA trade deadline quickly approaching. Of those currently slated to pick in the lottery, a team like the Washington Wizards could make sense. They have pushed back against trading NBA leading scorer Bradley Beal, and want to add more core pieces to go with him. Washington’s 2021 first-round pick and a youngster like wing Troy Brown Jr. could be enough to entice Atlanta.

Hawks general manager Travis Schlenk has a history with the Golden State Warriors. Prior to taking over in Atlanta, he was their assistant general manager under Bob Myers.

Golden State is also expected to be aggressive leading up to the NBA trade deadline. Whether anything comes to fruition on this front will likely depend heavily on the Warriors offering up the valuable Minnesota Timberwolves first-round pick stemming from the D’Angelo Russell for Andrew Wiggins blockbuster. Said selection is top-three protected in 2021 and unprotected in 2022.

Other bottom-end playoff contenders on the verge of the lottery could also show interest in a John Collins trade. Among them, the surprising Charlotte Hornets would make sense.

They have played tremendous basketball with stud rookie LaMelo Ball and free-agent acquisition Gordon Hayward leading the charge. There’s certainly a need at power forward in Charlotte, too.

You get the point. There’s not going to be a shortage of interest in a dynamic 23-year-old forward who is already flashing 20-point per game potential. Right now, it’s going to be all about Atlanta weighing what other teams are willing to offer in a John Collins trade and ultimately pulling the trigger.

Click below for more Atlanta Hawks news and rumors.