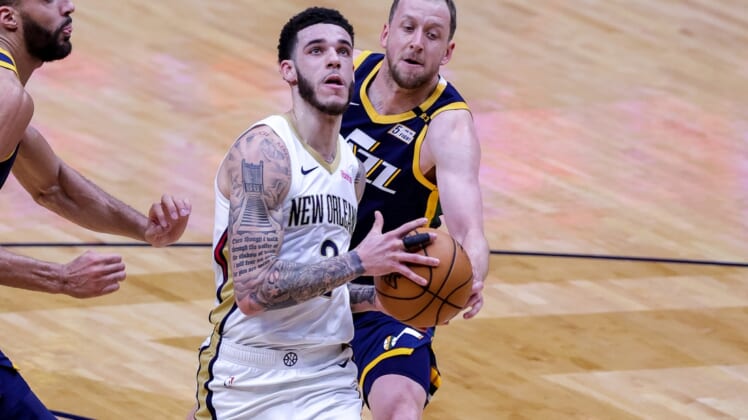 Recently, Golden State Warriors rumors have pointed in the direction of the team adding someone ahead of the NBA trade deadline. Most notably, general manager Bob Myers and Co. are interested in Houston Rockets All-Star guard Victor Oladipo.

Whether something happens in San Francisco over the next two weeks remains to be seen. However, Myers just recently indicated that his team will be aggressive in making calls and listening to offers.

“We’ll be aggressive. We’ll look around. There were years where we had the best record and were pretty quiet at the trade deadline. We didn’t really do much or make many calls,” Myers told 95.7 The Game in the Bay Area (h/t NBC Sports Bay Area). “I think we’ll be more open in making calls and listening to calls than we’ve been.”

This shouldn’t come as too much of a surprise. Despite other teams looking to cut their payrolls amid the economic downturn created by COVID-19, rumors have suggested that the Warriors’ ownership group is looking to spend money.

It’s somewhat eye-opening in that the acquisition of Kelly Oubre cost Golden State a whopping $80 million due to the team being well over the NBA luxury tax. With that said, there appears to be a lot to these comments from Myers.

Golden State Warriors rumors: Who will the team target ahead of the NBA trade deadline?

As mentioned above, there’s some talk of the Warriors being interested in Oladipo. That makes sense for a number of reasons. It likely wouldn’t cost either James Wiseman or the valuable Minnesota Timberwolves’ future first-round pick to pry him away from Houston.

An impending free agent, Golden State also wouldn’t have the cap room to sign Oladipo outright during the summer due to its salary cap issues.

Whether Oladipo would be a long-term fit with the Warriors remains to be seen. Klay Thompson is set to return next season after missing the past two years. Obviously, Golden State has MVP candidate Stephen Curry in the backcourt. It also has two wings, Andrew Wiggins and Kelly Oubre, who could fit into the Warriors’ long-term plans.

There’s also been some reports that the Warriors have exchanged words with the New Orleans Pelicans about impending restricted free agent Lonzo Ball. He might actually make more sense than Oladipo.

The idea would be for Ball to man the point guard position with Curry sliding over to the two and Thompson playing out on the wing. Oubre had been mentioned as a possibility to head to New Orleans in that hypothetical trade scenario.

What we do know is that Warriors rumors have pointed in the direction of them refusing to move off Wiseman or that above-mentioned Timberwolves pick without adding a true generational talent. Giannis Antetokounmpo and Joel Embiid were bandied about in that report. Neither one is going anywhere any time soon.

It’s also important to note that being aggressive and pulling off a notable deal ahead of the NBA trade deadline are two different things. At 19-18 on the season, Golden State is not going to mortgage its future for a short-term fix.

Meanwhile, the Warriors’ options would open up even more this coming summer. Minnesota’s first-round pick is top-three protected in 2021 and unprotected in 2022.

The Wolves own the worst record in the NBA right now, but only boast an estimated 50% chance of keeping said pick in a draft class that is absolutely stacked. Objectively, that pick is the most-coveted trade chip in the NBA right now. Golden State could potentially use it to acquire a true star during the summer, enhancing its championship odds moving forward.