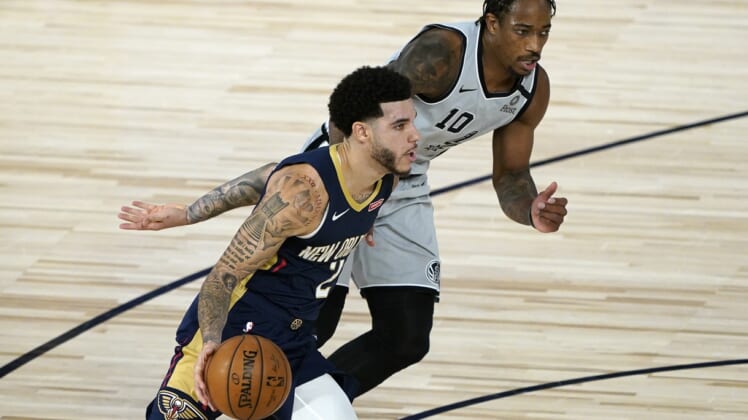 There’s a good chance that we’ll see a Lonzo Ball trade from the New Orleans Pelicans ahead of the March 25 deadline. NBA rumors have been pointing in this direction with the 23-year-old Ball off to a slow start this season.

Now that New Orleans looks more like a pretender than a playoff contender, look for talk of a potential Ball trade to heat up in the coming weeks.

If so, who might show interest in the still-young point guard? Below, we check in on four ideal Ball trade scenarios.

Even with Danny Green and Seth Curry doing their things, the 76ers could still use more outside shooting threats. Ball is shooting at just 29% from distance this season. He’s also attempting a ridiculous 7.2 three-point attempts per game. Even then, the youngster did shoot at a 37% mark from beyond the two-point line in 2019-20. He certainly has the range.

A move of this ilk would enable Ben Simmons to play a bit more off the ball after he’s struggled to open the 2020-21 campaign. It would also give MVP candidate Joel Embiid a second elite passer to distribute him the ball. This hypothetical Lonzo Ball trade makes so much sense for Philadelphia.

As for the Pelicans’ return, taking on the expiring contracts of Mike Scott and Terrance Ferguson is a necessity under the salary cap. New Orleans then adds a solid young guard in Shake Milton to help with rebuild. It’s been noted that Pelicans front office head David Griffin wants a younger backcourt. Milton, 24, would help provide that.

Collin Sexton continues to play at an All-Star level for a surprising Cavaliers team. We’re just not 100% sure that Darius Garland is a great mix with him in the backcourt.

Both Sexton and Garland stand at 6-foot-1, creating some issues with size in the backcourt. That’s where Ball and his 6-foot-6 frame could come into play. Ball would man the point on offense in Cleveland while guarding the larger backcourt opponents on the other end of the court. It’s a match made in heaven.

It’s also in this that New Orleans could take a chance on Garland moving forward. A lottery pick back in 2019, the 21-year-old guard is averaging 14.3 points and 5.7 assists on 42% shooting as a sophomore. He could team up with rookie Kira Lewis to form a solid point guard tandem in New Orleans moving forward.

It was reported recently that the Pelicans and Warriors have talked about a trade that would send Kelly Oubre to New Orleans. However, it’s not yet known who would come back to Golden State between either JJ Redick or Ball. Given that the Warriors are both contending for a playoff spot this season and looking to the future, Ball makes more sense.

Ball would act as an upgrade over who the Warriors have behind Stephen Curry at point guard. He could also play point with Steph being a bit more off-ball moving forward. A deal of this ilk makes a ton of sense for Golden State.

However, there’s no telling how it would work for New Orleans. The team is not trading Ball for Oubre straight up, especially with the latter seeing his contract expire next summer. Golden State isn’t going to be willing to move the first-round pick it boasts from the Minnesota Timberwolves. Perhaps, something like Ball and underperforming sophomore Jaxson Hayes for Oubre, Jordan Poole and the Warriors’ first-round pick in 2023 could make sense.

A move of this ilk would require New York to deal away the first-round pick in 2021 it acquired in the Kristaps Porzingis trade with the Dallas Mavericks. From there, New Orleans could demand Ntilikina and fellow former first-round pick Kevin Knox to see if it can get anything of substance from either player. Although, the first-round pick would be a centerpiece in this trade — adding to David Griffin’s stockpile of selections.