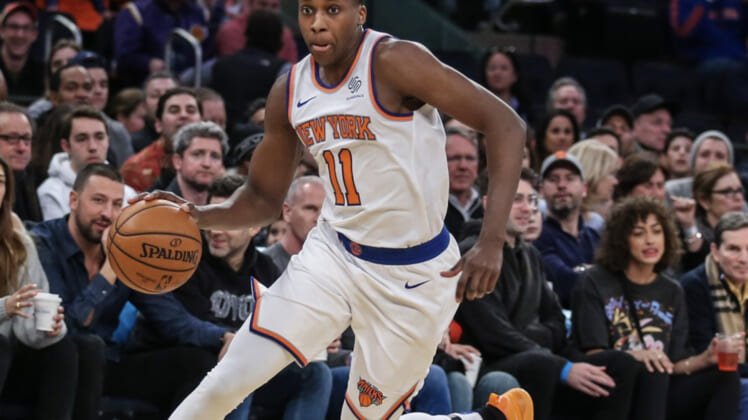 The New York Knicks’ lack of success on draft day is already known. It dates back to the Patrick Ewing era. No joke.

Apparently, this could also continue into the summer of 2019. According to Marc Berman of the NY Post, 2017 top-10 pick, point guard Frank Ntilikina, could be had in a trade for the right price this coming June.

“According to a source, Knicks brass will explore their options on draft night with Ntilikina. Obviously, Ntilikina is available in any Anthony Davis package, but if the Knicks can acquire an extra first-round pick for him, they would consider it,” Berman reported Thursday.

At this point, it’s hard to envision the Knicks even being able to land a first-round pick for the disappointing 20-year-old guard.

Considered raw on the offensive end of the court when he entered the league as the No. 8 overall pick back in 2017, Ntilikina is averaging just 5.9 points on 34 percent shooting as a sophomore this season.

He’s taken a back seat to both Emmanuel Mudiay and Dennis Smith. Jr in the rotation this season. Given New York’s lack of success, that has to scare off potential bidders for Ntilikina‘s services this summer.