The 2021 preseason marks a key change in which the NFL reduced the number of exhibition games from four to three, so the Cleveland Browns‘ best players are even less likely to get a lot of reps before the regular season gets underway.

However, we can still learn a lot about the Browns’ future outlook from these next three contests. Check out the top five storylines that are worth following as Cleveland’s preseason unfolds.

Greedy Williams vs Greg Newsome II to start at cornerback

A sort of freak nerve damage injury to his shoulder cost Greedy Williams the entire 2020 campaign, and left the Browns extremely thin at the cornerback position. GM Andrew Berry drafted Greg Newsome II out of Northwestern in the first round of the 2021 NFL Draft to address that spot.

There are a lot of additions to Cleveland’s defense who need to get on the same page, but no individual position has a more pivotal head-to-head competition than Williams and Newsome for the right to start opposite Denzel Ward on the outside.

Newsome was banged up throughout his college career, yet he’s stayed healthy through his first NFL training camp and is living up to the hype so far. Williams is going to get the first crack at the job, but don’t be surprised if Newsome eclipses him by preseason’s end.

Rashard Higgins’ self-described divine chemistry with quarterback Baker Mayfield dates back to their time working as backups when Mayfield was a rookie. Thus, while Higgins is virtually guaranteed a roster spot by virtue of that bond, there’s another wideout who may be pressing him for snaps.

We’re talking about 2020 sixth-round pick Donovan Peoples-Jones. Following an underwhelming career at Michigan, Peoples-Jones saw his draft stock go in the tank. Cleveland capitalized on the former top-flight recruit’s fall and scooped him up on Day 3.

Even as a rookie, Peoples-Jones flashed his explosiveness, averaging 21.7 yards per catch on 14 receptions. Even though the Browns deploy multiple tight ends often and usually only have two-receiver sets, they’re not going to ignore that type of big-play potential.

Peoples-Jones just has a much higher ceiling than other incumbents like Higgins and KhaDarel Hodge and has been lighting it up in camp. Look for him to be the go-to guy while Odell Beckham Jr. and Jarvis Landry likely sit for much of the preseason.

The Browns have one of the best offensive line coaches in the business in Bill Callahan. After their unit struggled mightily in 2019, Callahan got them into shape in short order, as Pro Football Focus rated Cleveland’s o-line No. 1 in the NFL last year.

Some of that was thanks to Kevin Stefanski bringing in a new scheme. Wyatt Teller’s individual dominance at right guard played a part, too, as did the addition of new tackles Jedrick Wills and Jack Conklin. Nevertheless, Callahan’s impact was obvious, as multiple new parts jelled together quickly.

Since all five starters are back for 2021, the Browns should do all they can to get their developmental players in for valuable reps. First-year player James Hudson has immense potential and is competing with Chris Hubbard for the swing tackle spot, so he’ll be one in particular to watch.

Also keep an eye on second-year center Nick Harris. He exceeded expectations during last year’s training camp and was preparing to step in Week 1 before J.C. Tretter returned from injury. Harris could be the starter in 2022 if the Browns opt to move off Tretter, who’s due to be almost a $10 million cap hit.

Malcolm Smith and B.J. Goodson played well a season ago. Smith re-signed with the Browns, but both were viewed more as stopgap options.

Jeremiah Owusu-Koramoah was a consensus first-round prospect who fell to Round 2 this year, and he’s going to factor in for a significant role right away thanks to his crushing hits and elite coverage skills. He’s not the only new acquisition Cleveland should be excited about, though.

The Indianapolis Colts already had a linebacker due a big contract in Darius Leonard, so they let Anthony Walker walk in free agency. Walker is now expected to be the Browns’ starting middle linebacker, but 2020 third-round pick Jacob Phillips is also in the mix. 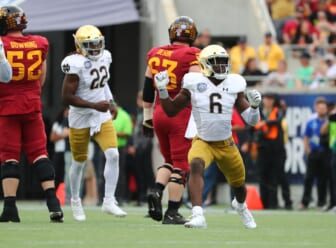 There’s a lot of youth converting potential into production for the Browns linebacker group as the 2021 season approaches. That’s all the more reason to be excited about the team’s upside on that side of the ball.

As Peoples-Jones proved, hyping up sixth-round picks as possible immediate contributors isn’t always a complete pipe dream. That’s may be true again in 2021 with the emergence of UCLA product Demetric Felton.

Cleveland is cross-training Felton at wide receiver and running back, and he also has a chance to contribute on special teams as a return man. Felton has the tools to be a “slash” playmaker who parlays a stellar preseason into surprise playing time, despite how loaded the Browns are at the skill positions.

Now, we’ve already spent plenty of time outlining the depth Cleveland has offensively, but one rookie who’s been relatively quiet as he’s dealt with a hamstring injury is Anthony Schwartz.

It was something of a surprise when the Browns drafted Schwartz in Round 3. However, with big price tags on Beckham and Landry, they clearly had an eye toward the future and envisioned a big role for Schwartz in the coming years.

Although Schwartz may continue to be brought along slowly, he was legitimately torn prior to his last year at Auburn about whether to stick with football or pursue an Olympic sprinting bid. The implication here is that Schwartz has so much more room to grow as a receiver, and his literal world-class speed is bound to pop off the screen when he gets some preseason action.