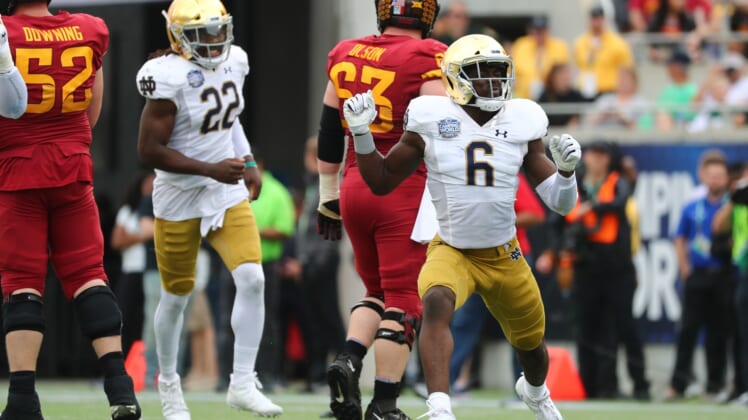 The Cleveland Browns continued reinforcing their defense in the 2021 NFL Draft, trading up in the second round to pick Notre Dame linebacker Jeremiah Owusu-Koramoah 52nd overall.

Ranked 17th on our big board, it was an absolute shock to see Owusu-Koramoah fall outside of the first round. The former Irish star has a knack for the ball, boasts the agility to be a sideline-to-sideline weakside linebacker in the NFL and can be an immediate impact player.

Used in a variety of different ways for Notre Dame, Owusu-Koramoah was simply a playmaker over the past two seasons — registering a combined 24.5 tackles for loss, seven sacks, five forced fumbles and four fumble recoveries.

The linebacker corps in Cleveland is nothing to write home about, frankly. Sione Takitaki is a pure run defense specialist, and Malcolm Smith is a year-to-year starter, although he did exceed expectations in 2020.

With Jacob Phillips and Mack Wilson still not contributing much to the position group, Browns general manager Andrew Berry did acquire former Indianapolis Colts standout Anthony Walker in free agency. However, Walker isn’t expected to be a star.

Owusu-Koramoah isn’t merely a linebacker, though. He has the type of skill set to play slot cornerback, has the hard-hitting mentality of a classic throwback linebacker and can truly be on the field for all three downs, even as a safety.

Having just won the Butkus Award as the top linebacker in college football, Owusu-Koramoah should have a big role as an NFL rookie.