With six teams on a bye, Week 8 in the NFL offers viewers 13 exciting matchups. As has been the case all season, some of these games will not follow nearly the path that expert minds have predicted.

One of the biggest upsets last week that not many would have boldly predicted, was the Minnesota Vikings giving up their undefeated status. Unfortunately, Minnesota’s woes might spill over into Week 8, as covered below.

Furthermore, a popular quarterback returning from his bye could hit a wall when it comes to scoring. Enjoy the following 10 bold predictions we have created for NFL Week 8. 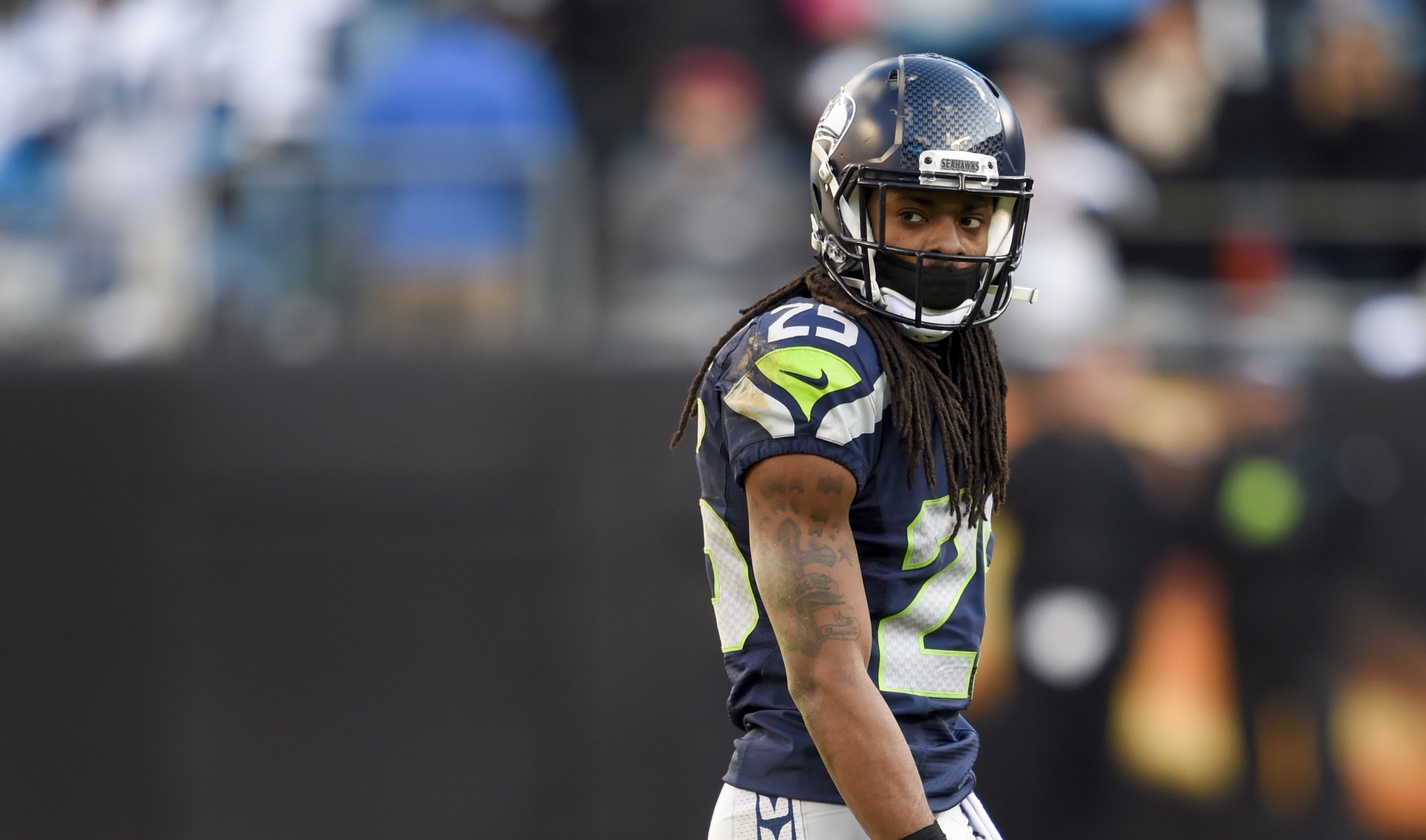 In a unique overtime tie in Week 7, the Seahawks held the Arizona Cardinals to zero touchdowns. Two field goals for each team were the only points put on the board.

Thankfully, that messy, disastrous game is behind. The Seahawks will look to rebound in a road game against the New Orleans Saints. Boy, will they have their work cut out once again. Despite winning just two games, the Saints play fierce at home. They have tallied 118 points in their three contests under the dome. That’s nearly 40 points per.

For his part, Drew Brees has thrown for 11 combined touchdowns along the way. Some might think Brees will be challenged to score just like Carson Palmer was last week against Seattle. That is just not going to happen this time around.

We are calling for Brees to add three passing touchdowns to his day. Add in a Mark Ingram rushing touchdown for the additional score, and the Saints will manage a narrow victory over Russell Wilson and the Seahawks.

Jones made NFL history when he recorded 300 receiving yards in a Week 4 win over the Carolina Panthers.

Now, we are boldly predicting another 300-yard monster game from Jones against the Green Bay Packers. News that the Packers could potentially be without three of their top cornerbacks is not good for Green Bay.

But, it is fabulous news for Jones and the Falcons if Quinten Rollins (groin) joins Sam Shields and Damarious Randall on the inactive list.

Jones leads the league with 830 receiving yards. With the exception of tallying up only 29 yards in Week 5, Jones has averaged 204.3 yards in three of his four last games.

Playing at home against a severely depleted secondary, Jones should absolutely thrive. A couple of trips to the end zone would be sweet icing on the cake. And in reality, the Packers themselves seem to be reserved to this happening. 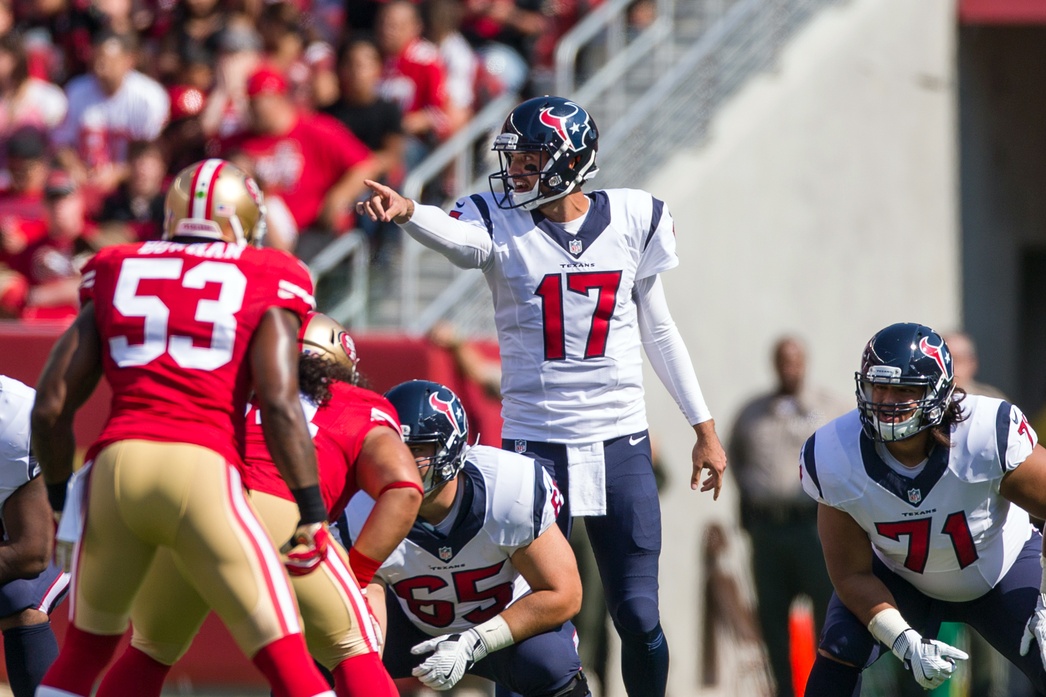 This is less laughable than it sounds.

Stafford’s numbers took a dip last week when he passed for only one touchdown against Washington. Now, he will be faced with a Texans defense that ranks fifth against the pass.

Quarterbacks opposing the Texans are completing only 58.2 percent of their passes and throwing for an average of 184.7 yards per outing. Heck, this unit has yielded just five passing touchdowns on the season.

While Osweiler has struggled early in his first season with the Texans, the quarterback is facing a soft Lions passing defense. Overall, Detroit has yielded a league high 18 passing touchdowns compared to three interception for an absurd 117.3 opposing quarterback rating. This should be good news for struggling receiver DeAndre Hopkins.

With Lamar Miller a bit banged up, Osweiler is going to have to attempt more passes.

Week 8 will be one of the rare weeks that Osweiler looks like a legitimate starting quarterback. He will outperform Stafford on paper en route to leading Houston to the win.

An unfortuante situation in his only start of the season sent Geno Smith to injured reserve last week. This led to Fitzpatrick regaining his starting job. Since Fitz is akin to the lesser of all quarterback evils on the Jets roster, he will remain under center against the Cleveland Browns in Week 8.

To date, Fitzpatrick’s numbers have been anything but stellar. He has thrown for 11 interceptions compared to six touchdowns and has completed only 57.4 percent of his passes in seven games.

Going up against the Browns should bring out the best in Fitzpatrick. Opposing quarterbacks are averaging 285.7 passing yards and 2.6 touchdowns per contest against Cleveland. Plus, the Browns are allowing a 106.9 quarterback rating to their competition.

Fitzpatrick passed for 374 yards and one touchdown in Week 2 against Buffalo. He will have similar success and add a couple of more scores to that stat line on Sunday.

The Raiders have been quite productive away from home this season, winning all four road games. This includes a 35-16 destruction of the Jacksonville Jaguars last week.

Since the Raiders are lined up for another away game against Tampa Bay, they are remaining in Florida instead of traveling back to California. For those of us that have experienced traveling from the West to the East coast, we know it takes a few days to adapt to that three-hour time change.

By this Sunday, the Raiders should be plenty adjusted to East coast time. Which means, their time clocks could be making them feel as if they are at home. Unfortunately, the Raiders have lost two-of-three of their games in Oakland.

In Week 8, the Raiders will be up against a Buccaneers team that just annihilated the San Francisco 49ers. Prior to their bye, the Buccaneers also beat the Carolina Panthers.

We will blame the time zone and the sheer fact that Mike Evans is going to thrash Oakland’s horrible defense for a Raiders loss in Week 8.

The Bills’ four-game winning streak was snapped last week when they fell to the Miami Dolphins. Along the way, Dolphins’ running back Jay Ajayi destroyed Buffalo on the ground to the tune of 214 rushing yards and a touchdown.

Now, the Bills will be faced with New England’s LeGarrette Blount. Blount just put up 127 rushing yards and two touchdowns on the road against the Pittsburgh Steelers last week. Now, we are calling for a huge performance from Blount at home.

Last time around, Blount did not fare so swell against the Bills. In Week 4, he rushed for only 54 yards en route to the Pats being shutout. This is not going to happen on Tom Brady’s watch in Week 8.

The Patriots boast a 25-3 record against Buffalo with Brady under center. New England is likely to establish a sizable lead against a beat up Bills squad. This puts Blount on track to put up some monster yardage as a result.

7. Chargers beat Broncos at home, and it’s not even close 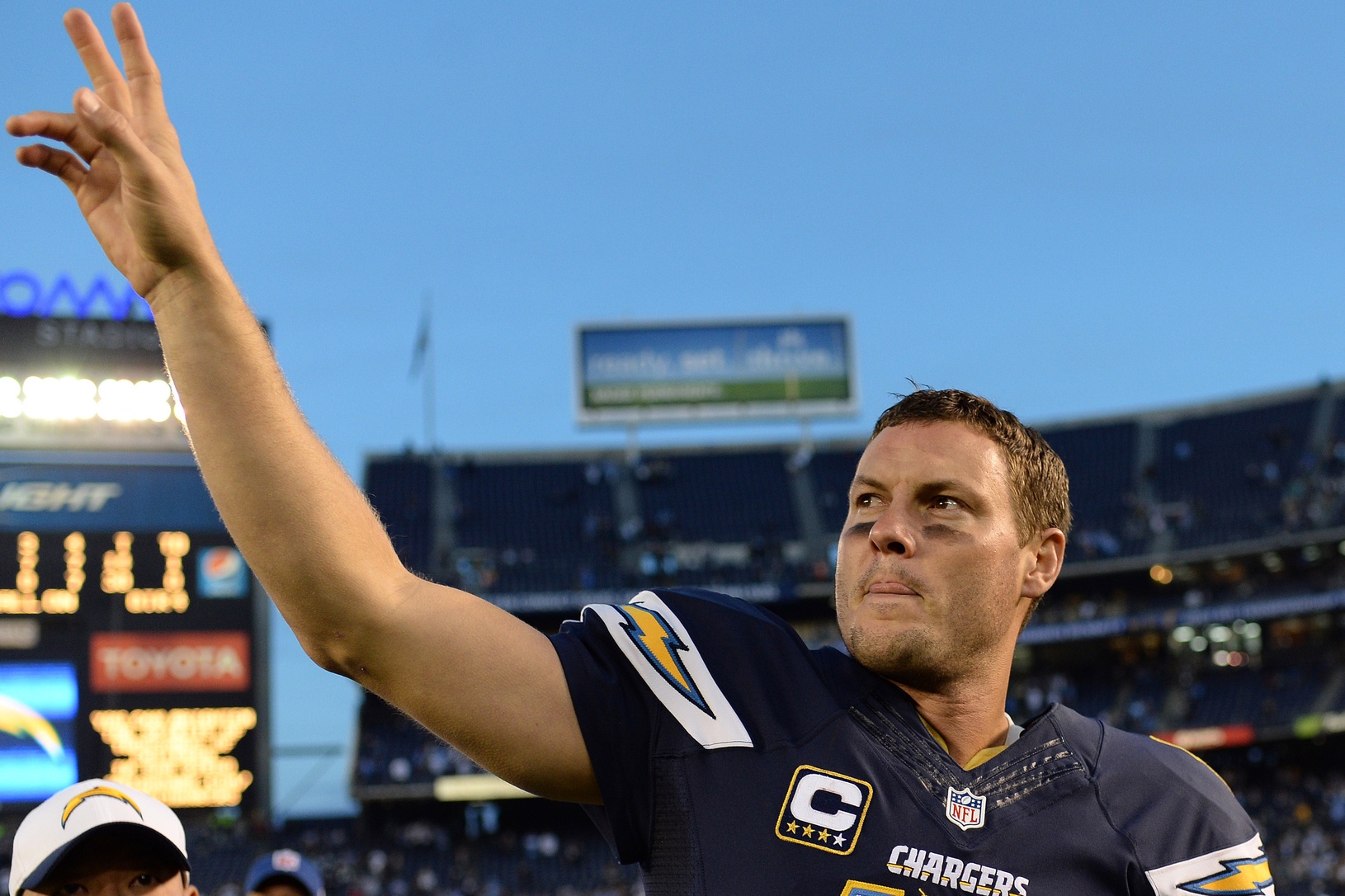 It has only been a couple of weeks, but the Chargers are on tap to face the Broncos for their second divisional game. This time it will be in Denver.

Despite the Chargers’ dominating performance against the Broncos last time around, odds favor Denver to win in Week 8. But, that task is going to be difficult. San Diego has the second-highest scoring offense in the league. Philip Rivers has been performing lights out and should be put up a much better performance than Brock Osweiler did in Denver last week.

Furthermore, Melvin Gordon has been a stud as both a rusher and receiver. He actually recorded the second-most rushing yards (94) against the Broncos in Week 6.

On the Broncos’ side, Trevor Siemian isn’t exactly putting up rock star numbers. He has passed for only three touchdowns and 455 total yards in his last three games. The Chargers are scoring far too many points on average per game (29.4) to fall to Denver. It is bold, but we are calling for a final score of 24-14 in favor of the road team.

8. Cam Newton pouty after failing to score in return

The Arizona Cardinals just held the Seahawks to zero touchdowns. We’re now, going to boldly predict that Arizona’s defense keeps Newton scoreless in his return to action in Week 8.

Newton is far from the touchdown slinging machine that he was last season. With only eight passing scores in six games, Super Cam is on pace for 21 touchdowns versus the 35 he threw in 2015.

Things won’t be easy for Newton going up against a Cardinals defense that has ceded only three passing touchdowns in its last four games. This is not to suggest the Panthers won’t score. But it won’t come from the passing prowess of Newton.

Meanwhile, the Cardinals will be looking to get back on course from that ugly tie game against Seattle. They should find plenty of success against Carolina’s pass defense that gave up a whopping 465 yards and four touchdowns to Drew Brees in Week 6.

A happy camper is the last thing Newton will be at his post game presser. 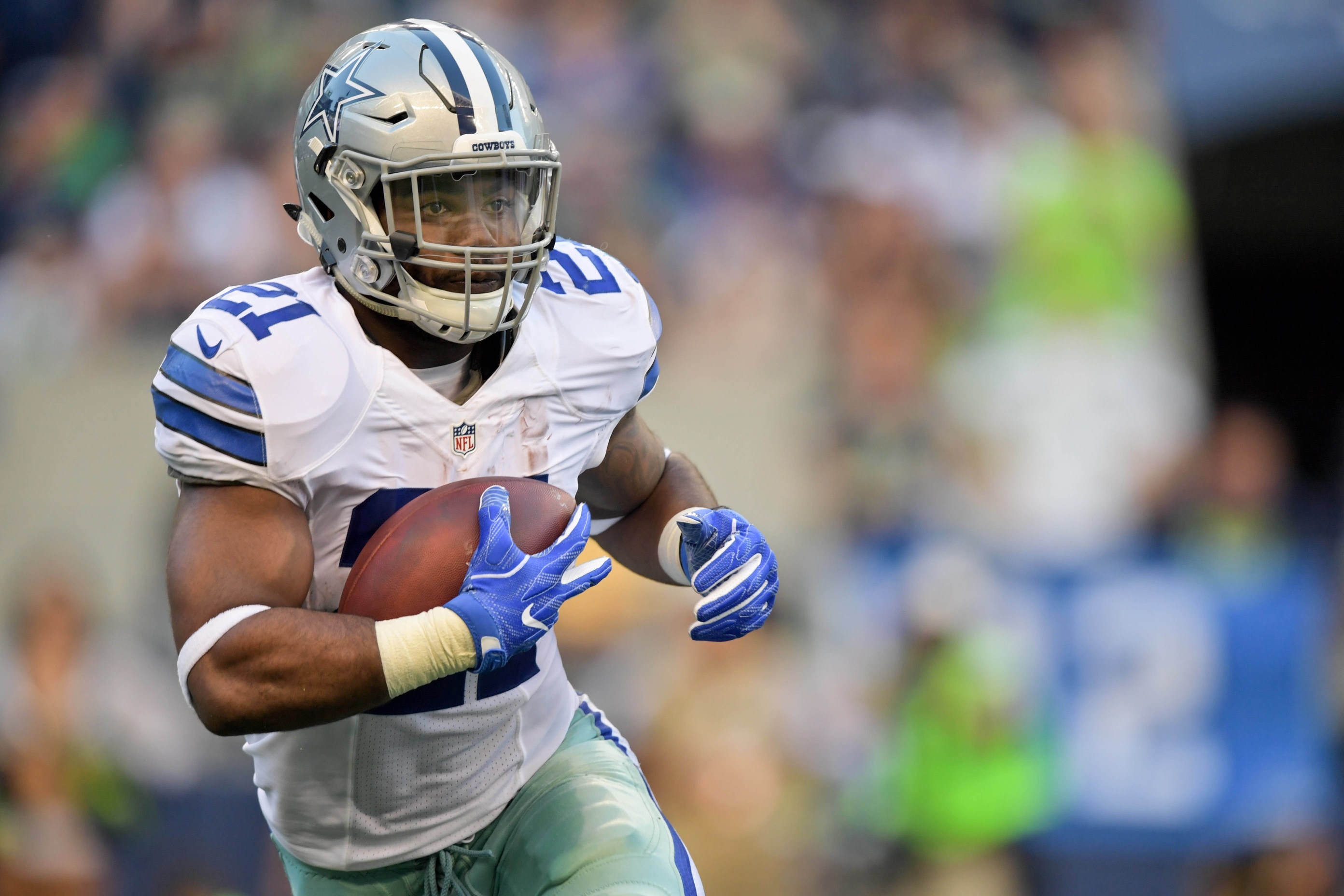 The Eagles’ rush defense ranks ninth-best in the league. This unit is yielding only 102.7 yards per game and has given up three rushing touchdowns in six games.

Keep in mind, Elliott has averaged 117.2 yards per contest. He should be hard pressed to put up yardage anywhere near this amount in Week 8, much less score.

So far, teams playing against Philly are scoring a lowly average of 14.7 points per tilt. And the Cowboys have given up only 17.8 points on average per meeting. Look for this rookie quarterback led matchup to be low-scoring all the way around.

Elliott should be on par for about 75 rushing yards and no touchdowns in Week 8.

Week 8 presents the long-awaited return of Bears quarterback Jay Cutler. The much-maligned signal caller has not played since Week 2.

He will now face a home matchup against the NFL’s No. 1 ranked Vikings defense. We are going to call for a bit of an upset against a heavily-favored Minnesota team here in Week 8.

The Vikings have lost six of seven games in Chicago since Cutler has been with the team. And the Bears defense has not been terrible as of late. It has managed nine sacks in the last three games. That includes two sacks against Aaron Rodgers in Week 7.

Surely, the Bears could do some rattling of Sam Bradford’s cage in the the Windy City. We just saw the bad version of Bradford last week when he threw for one touchdown compared to one interception and four fumbles.

Meanwhile, Cutler is rested. He is sure to face his challenges against the Vikings, but history should repeat. After all, not too many folks called for the Carson Wentz-led Eagles to prevail against Minnesota last week.