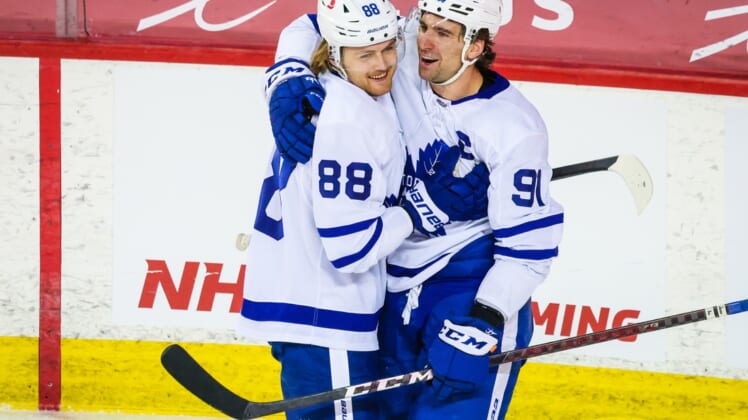 John Tavares scored in the third period to end a tie and the visiting Toronto Maple Leafs went on to defeat the Calgary Flames 4-2 on Sunday night.

Tavares also had an assist while Auston Matthews added a goal and an assist for the Maple Leafs, who have won three straight.

Joakim Nordstrom and Andrew Mangiapane scored for the Flames, who had 26 saves from David Rittich.

Toronto scored first, but Calgary led 2-1 after one period.

The Maple Leafs capitalized on a turnover in the Flames’ defensive zone to take the lead 58 seconds into the game. Rielly scored his fourth goal of the season with a high shot from the left circle.

Only 29 seconds later, Calgary’s Mikael Backlund was stopped by Hutchinson on a breakaway.

The Flames did score at 11:43 from a faceoff win when Nordstrom deflected Mark Giordano’s point shot. It was Nordstrom’s first goal of the season and the assist was Giordano’s 500th career point.

Toronto led 12-11 in shots on goal after the first period.

Midway through the second period, Calgary’s Matthew Tkachuk jammed his leg along the boards. He limped to the locker room but was soon back on the bench.

Galchenyuk tied the game at 17:08 of the second from a close-in shot set up by a short pass from Tavares. It was Galchenyuk’s second goal of the season and first with the Maple Leafs.

Calgary led 24-18 in shots on goal after two periods.

The Maple Leafs took a 3-2 lead at 6:55 of the third period when the rebound on a shot by Tavares was knocked in by the skate of Calgary defenseman Noah Hanifin. It was the 11th goal this season for Tavares.

Matthews scored his 25th goal of the season from the slot at 9:16.