There are NFL games today with Week 2 of the preseason arriving as the Seattle Seahawks host the Chicago Bears in a nationally-televised matchup on ESPN.

While most look past the preseason box scores and final results, these matchups play an important role on the real NFL season. This is the time when young players first emerge, questions are raised about teams with issues and we get perspective on how teams will fare in 2022.

Before kickoff arrives, let’s examine four storylines to monitor for the Bears and Seahawks on Thursday night.

While quarterback Justin Fields struggled in 2021, it’s easy to see how the lack of talent around him and a bad coaching staff set the rookie up to fail. Everyone hopes it will be different, but many are unconvinced based on Chicago’s offseason moves. 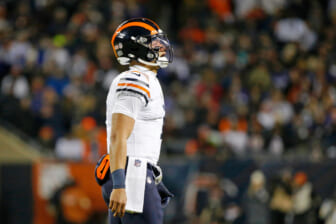 Also Read:
How the Chicago Bears are setting up QB Justin Fields to fail in 2022

However, Fields showed some nice flashes in the preseason opener. Despite missing four of their top six receivers and an offensive line that allowed three hits in the first five drop backs, he showed impressive arm talent on third-down strikes to Darnell Mooney and Tajae Sharpe.

Meanwhile, there is a quarterback competition in Seattle. Drew Lock seemed to be gaining ground, announced as the starting quarterback against Chicago days before the game. Unfortunately, he tested positive for COVID-19 and won’t suit up.

It opens the door for Geno Smith, who impressed as a fill-in starter last year when Russell Wilson went down. Smith knows the offense and his ability to make smart decisions and display some accuracy made him the favorite over Lock. If Smith can deliver a strong performance on Thursday, we might remember the Bears vs Seahawks matchup as the night Pete Carroll decided on his starting quarterback.

Both teams are facing plenty of questions regarding the offensive line. Seattle made significant investments with its draft capital in the 2022 NFL Draft, but this unit is still a work in progress. As for Chicago, one of the worst offensive lines in 2021 doesn’t look much better on paper this year.

The Bears are hoping to see something out of Teven Jenkins. A second-round pick in the 2021 NFLD raft, the 6-foot-6 tackle hasn’t looked the same since he underwent back surgery. Realizing he can no longer move nearly as well as before, Chicago kicked him inside to guard. If he struggles inside, Jenkins’ future with the team looks bleak.

The Seahawks had a really good showing last weekk. We will have to see if they can keep playing well and demonstrate that this is no longer an Achilles heel for the offense. It will be a major area to keep an eye on because both teams improve by leaps and bounds if the protection holds up for their quarterbacks and make holes for the running backs.

Thursday’s Bears vs Seahawks matchup likely won’t offer us an opportunity to get an extensive look at either David Montgomery or Rashaad Penny. With both running backs expected to play important roles for their teams in 2022, Chicago and Seattle will play it safe. It opens the door for some young, unheralded running backs to shine.

The Bears’ Trestan Ebner and Seahawks’ DeeJay Dallas delivered strong performances in their preseason openers. For Ebner, a sixth-round rookie, this is an opportunity to build off a strong debut that carried over into more reps in practice. As for Dallas, he’ll receive more touches with Kenneth Walker sidelined.

Battles in the trenches could shape outcome

One of the positives from the first Bears’ preseason game was the play of young defensive linemen. Against the Kansas City Chiefs, Trevon Coley (two sacks), Micah Dew-Treadway (one sack) and Dominique Robinson (one sack) totaled four sacks and four tackles for loss. It provided something to build on heading into Week 2.

Seattle’s had one standout, Myles Adams, who had a pass deflection and a tackle for a loss. However, there are some intriguing names to keep an eye on like Darrell Taylor, Quinton Jefferson and LJ Collier. One thing is for certain, both teams will provide a few chances to pressure the opposing quarterback.

This will be a battle in the trenches to come out victorious. Both have shown flashes at the skill positions but the key to this matchup is which teams offensive and defensive lines can take a step forward and play well. It will be an exciting game to watch and see how these stories play out.