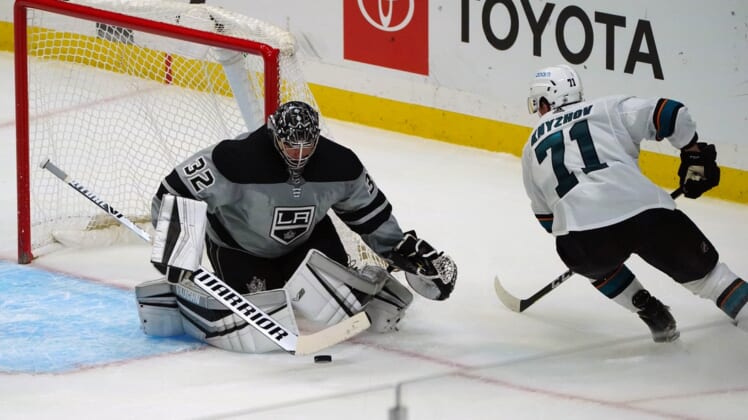 The Los Angeles Kings hope to catch an updraft and get to where the Arizona Coyotes are perched, but they’re quickly running out of time.

The Kings are scheduled to host the Coyotes in the opener of their two-game set on Monday.

Arizona moved into fourth place in the West Division on Friday with a 4-2 win at the Anaheim Ducks, and expanded their edge to three points over the fifth-place St. Louis Blues and San Jose Sharks by rallying for a 3-2 overtime win in the second meeting in Anaheim on Sunday.

“Win or lose, I need an even keel from this team,” Arizona coach Rick Tocchet said.

The Coyotes have won five of six and six of eight while simultaneously taking advantage of a major slide by the Blues, who have lost six in a row and 11 of 13.

The Sharks, who swept a two-game set in Los Angeles over the weekend, have also taken advantage of the opening left by the Blues while also winning six of their past eight.

The Kings, meanwhile, have dropped five of their past six and eight of 11 to fall seven points out of the final playoff spot in the West with 20 games left, including five against Arizona.

Kings coach Todd McLellan said nobody is more aware of the playoff scenario than the coaching staff and players. They also know there will be more movement in the standings with nothing but division games left on the schedule.

“Let’s not kid each other,” he said. “We’ve had a six-game winning streak, and then we’ve gone the other way. “It happens to teams. There’s lots of hockey left, and we just have to find ways here.”

The Coyotes are feeling confident after rallying from 2-1 deficits to win both games in Anaheim.

Adin Hill has started the past six games for the Coyotes, but they could get Darcy Kuemper back from injury on Monday.

Arizona forward Tyler Pitlick also drove out to Southern California and is a possibility for Monday, Tocchet said.

Among the players who are playing well for the Coyotes is Jakob Chychrun, who recorded his first NHL hat trick in the 3-2 overtime win on Sunday.

“He’s a double-digit goal scorer,” Tocchet said. “He’s having a hell of a year for us.”

Alex Goligoski, who had just two assists in the first 32 games this season, has a goal and five assists in his past six games, and Nick Schmaltz is riding a five-game point streak (two goals, four assists).

Getting three goals against Arizona will be key for the Kings, who are 4-0-0 in their past 12 games when scoring more than two goals, and 0-8-0 when they don’t.

The power play can usually provide a boost for a struggling offense, but the Kings are scoreless on their past 20 power plays.

“It’s an old cliche, any time a coach is saying we have to find ways, it’s used too often, but it is what it is,” McLellan said. “We’ve got to go out and win a few games coming up.”