Should Ezekiel Elliott be benched in fantasy in Week 9 and beyond? 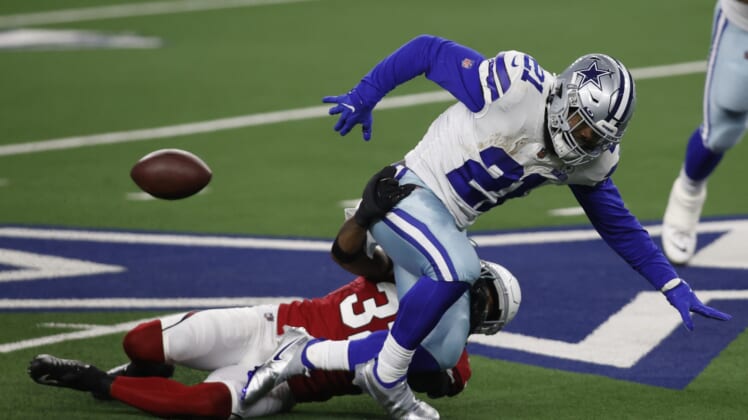 Dallas Cowboys star running back Ezekiel Elliott’s fantasy football value is snowballing downhill at a rapid pace. This makes Elliott a must-sit in fantasy Week 9 and possibly beyond.

Here are the facts.

Unfortunately, Elliott’s fantasy value is tied to how long the Cowboys can sustain drives and make plays. Since the season-ending injury to Dak Prescott, backups (Andy Dalton and Ben DiNucci) have struggled to keep the Cowboys on the field.

Without Prescott over the course of the past three games, the Cowboys have combined for 22 points on offense. During this span, Elliott has touched the ball a combined 53 times with some major fumble issues. This has resulted in Elliott averaging only 68 total yards per game, without a touchdown in sight. There’s even been calls for backup Tony Pollard to get into the mix more.

That equals the value of a bag of peanuts in fantasy points.

If Elliott owners are thinking of starting him in Week 9, that’s a bad idea. The Steelers have been performing off the charts on defense. There is no way Dallas and whoever is quarterbacking this Sunday keeps up with Pittsburgh.

Dallas will have to force the ball downfield by throwing, which will limit the many rushing opportunities Elliott needs to gain fantasy points.

For those still on the fence about Ezekiel Elliott, note that the Steelers have given up the second-fewest fantasy points to running backs all season.

Lastly, Elliott is rehabbing a minor hamstring injury. If he suffers a setback, Tony Pollard will step in to scrap up whatever points Elliott might have managed for his fantasy owners.

Elliott’s fantasy outlook beyond this Sunday

This needs to be monitored. Ezekiel Elliott will benefit once Andy Dalton returns (hopefully soon). But it is hard to imagine Elliott earning those RB1 fantasy numbers we all used to love with Dallas’ offense in such disfunction.

In Weeks 10 and 11, Elliott will face the Vikings and Washington. Minnesota’s run defense ranks middle of the pack. Meanwhile Washington is a tougher cookie. Ezekiel Elliott managed to record only 51 yards in their first matchup

Hopefully those who own Ezekiel Elliott have acquired better fantasy options at running back. He’s simply a shell of his former fantasy stud self from his seasons’ past and needs to be on the bench until further notice.

Update November 9, 2020: Elliott was used sparingly against Pittsburgh in Week 9 and he recorded a total of 69 yards and zero touchdowns. He is a flex fantasy player at best producing these type of numbers moving forward.