Andy Dalton to COVID list, ruled out for Cowboys Week 9 game against Steelers 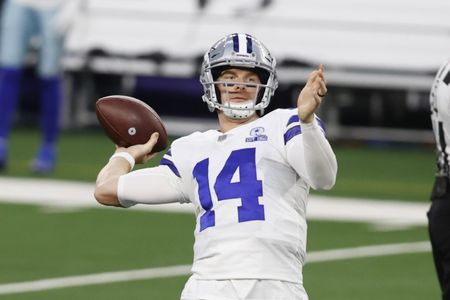 Dallas Cowboys quarterback Andy Dalton is going from one protocol to another. Dalton will be placed on reserve/COVID-19 this week, sidelining him for a second consecutive game, according to multiple reports Tuesday.

Ben DiNucci is expected to get his second start this week against the Pittsburgh Steelers.

Dalton missed last week’s loss to the Philadelphia Eagles after suffering a concussion during the Cowboys’ Oct. 25 loss against the Washington Football Team. Dallas is 2-6 and riding a three-game losing streak with the 7-0 Steelers coming in.

Dalton, 33, was expected to start against the Steelers, having reportedly cleared the concussion protocol.

Dalton came in for the injured Dak Prescott in the Cowboys’ Oct. 11 game against the New York Giants after Prescott went down with a gruesome, season-ending ankle injury. Dalton has played one full game in Prescott’s absence, a 38-10 loss to the Arizona Cardinals on Oct. 19.

Dalton is 52-for-85 passing for 452 yards with a touchdown against three interceptions this season. He was a three-time Pro Bowl selection in his nine years as the starting quarterback for the Cincinnati Bengals.