After trading away quarterback Russell Wilson, many wondered if the Seattle Seahawks might flip Tyler Lockett and DK Metcalf to launch a total rebuild. While it’s still early in the offseason, that doesn’t seem to be in the franchise’s plans.

Seattle is headed towards its original identity under head coach Pete Carroll, a run-first offense that competes with defense and clock control. It’s not an ideal fit for Lockett and Metcalf, two of the best receivers in the NFL.

At a time when the Seahawks are headed in the wrong direction and the NFC West is crowded, trading away at least one of the top pass-catchers seemingly made sense. However, Seattle might not be interested in making that happen.

After reaching out to multiple Seahawks’ sources, Mike Sando of The Athletic came away with the impression that there isn’t any legitimacy to NFL trade rumors suggesting either Lockett or Metcalf is moved. 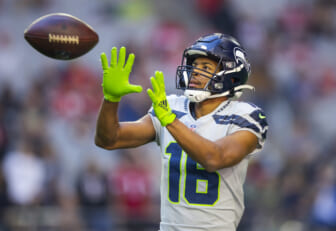 While Metcalf is in the final year of his rookie contract, he still might be a player the Seahawks want to build around. They can place the franchise tag on him next offseason and they’ll have more than enough cap space to handle a fully-guaranteed salary without any restrictions.

As for Lockett, he just signed a multi-year extension with Seattle in April 2021. Considering what he’s become since the Seahawks drafted him 69th overall in the 2015 NFL Draft, Carroll might want to keep him around.

Of course, this could all be about positioning by the Seahawks’ front office. If the right offer comes, one of these offensive weapons may be moved.