Why Seattle Mariners’ future is reliant on outfield breakthrough 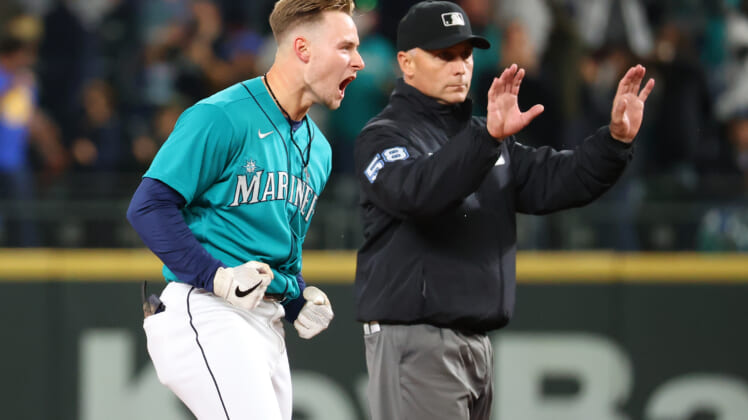 The Seattle Mariners were a surprise team in the American League this season. Finishing 90-72, they earned second place in the AL West and missed a play-in-game for the AL Wild Card Game by two games. Where do the Mariners go from here?

In thought, 90 wins is enough to crack the Wild Card Game, but that wasn’t the case for Seattle. They got through the season by relying on starting pitching and were given a shot in the arm with their offense improving down the home stretch. Regarding the latter, though, an uptick in offense is paramount for any success the Mariners aspire to achieve in the coming years.

This is primarily from their touted young outfielders coming into their own as considerable threats in the batter’s box. Here’s why the Mariners need their young outfielders to play the part in 2022 and beyond.

At one point or another, Jarred Kelenic, Taylor Trammell and Kyle Lewis were supposed to be a vital part of the Mariners’ future. To date, their pro showings have left much to be desired.

Kelenic was labeled one of the top prospects in MLB, a categorization he struggled to play up to in his extensive time with the big-league club this season. He struck out at a high rate and struggled mightily to get on base by means of contact and/or line-drive hitting.

Trammell is in a similar boat as he was the featured aspect of a blockbuster trade for the Mariners and has been unable to pick up steam in the big leagues (Kelenic came to Seattle in the Robinson Cano-Edwin Diaz trade while Trammell came to Seattle in the Austin Nola trade). He struck out at an alarming clip and was a boom-or-bust hitter this season.

Lewis’ issue hasn’t been performance. In 2020, he flaunted a power bat and the potential from all aspects of the game to be the team’s everyday center fielder. Lewis was held back by a knee injury this season, which limited him to 36 games. Last season he was the best thing the Mariners had going for them. A healthy Lewis coupled with respectable offensive versions of Kelenic and Trammell goes a long way for this ballclub.

Lewis has a smooth, power swing and the tools to be a .900 OPS player. Let’s say he comes close to doing so while Kelenic hits .250 and Trammell brings down the strikeouts: the Mariners have a compelling offense.

The weakness of the 2021 Mariners was their offense, as it was a struggle for them to get runners on base and across home plate. Their pitching kept them in games, and the team grinded out an extraordinary 14 extra-inning affairs. At the same time, they made strides en route to nearing cracking the playoffs.

J.P. Crawford is a steady contact hitter who has grown into a reliable everyday shortstop. Ty France progressed all season at the plate to the point where he looks like the team’s answer at first base.

All the while, veteran sluggers Mitch Haniger and Kyle Seager each logged 35-plus home runs and 100-plus RBIs. They remain proven power hitters in their prime who field their positions well. Haniger and Seager can complement an improved outfield.

Once again: starting pitching carried the Mariners this season. With that said, it’s not guaranteed to be the hallmark of their operation moving forward.

Now, there are some individuals with upside, as Yusei Kikuchi pitched well for most of the season, and Logan Gilbert had his moments. Maybe Justin Dunn can get healthy and be a rotation fixture? On the other hand, Chris Flexen has been a reliever for most of his career, Tyler Anderson, a free agent this offseason, is spotty and Marco Gonzales has been inconsistent.

Top pitching prospects George Kirby and Emerson Hancock are nearing their big-league debuts. While perhaps sources of hope, Seattle can’t bank on the pair of young arms being dynamite from the jump, the same way they can’t assume that veterans who had career years are going to pick up where they left off next season.

Seattle has to deal with the Houston Astros, a perennial contender, the Oakland Athletics, a continual playoff threat, and a competitive Los Angeles Angels team in the AL West. Meanwhile, four teams in the AL East finished with 91-plus wins. A Wild Card berth isn’t a given for the Mariners next season.

They need a new dimension to stay afloat while their rotation works itself out. Their pitching staff can still be a reliable force. It’s a situation where they have to take a step back to take another step forward, a process which will presumably creep into the regular season.

The Mariners have a surplus of former top position player prospects. It’s time for some of them to play up to that billing. At the end of the day, it’s the make-or-break factor for them competing in the playoffs with their current regime.