Sean McVay, Amazon had meeting set, now coach may have new contract worth $20M per year 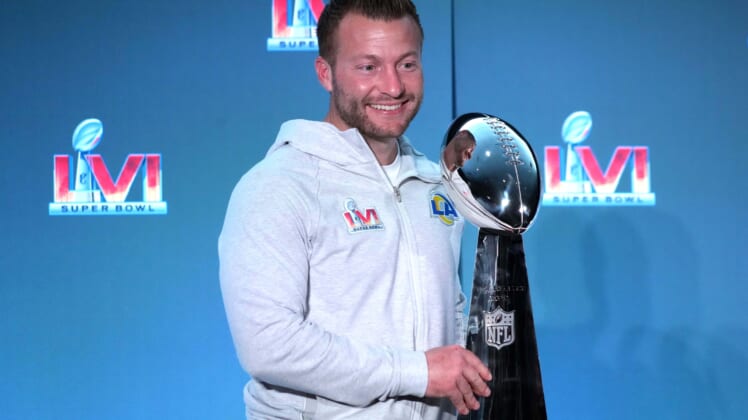 Since winning Super Bowl LVI, Los Angeles Rams head coach Sean McVay has been busier than one would expect for someone coming off a stressful six-month stretch.

There’s been rumors of his retirement, which have since been squashed.

But maybe they weren’t actually completely squashed at the time his fiancee said McVay was in LA to stay.

Amazon had meeting set up with Sean McVay

We’ve since learned Sean McVay is staying put, with no plans to do anything other than place his focus on trying to repeat as Super Bowl champions with the Rams.

But McVay may have been closer to hanging up his clipboard than we thought.

According to Andrew Marchand of the New York Post, McVay was prepared to meet with Amazon next week. Why would he be meeting with Amazon?

They’re reportedly seen as frontrunners to take over NFL Sunday Ticket in 2023 and they may have been looking at their broadcasting options before they make such a move.

While they were likely interested in adding McVay to their team right away for Thursday Night Football broadcasts, it doesn’t look like McVay was ready to leave the coaching world just yet.

It’s certainly possible that Sean McVay was debating a move to the TV screen, or maybe he was using his high-profile accomplishments to secure a bigger paycheck.

According to Marchand, McVay likely received a new contract that pays nearly double what he made last year as a Super Bowl winning head coach.

It’s believed that McVay was earning $8.5 million a year ago. Now? McVay’s new contract is believed to be in the range of anywhere between $15 to $18 million per year, according to Mike Florio of Pro Football Talk.

Thay’s not all. Amazon was reportedly willing to offer as much as $20 million per season on a five-year, $100 million contrac that would give him his first job as a television analyst. Which is, a bit more than most make the first time they try something new.

If McVay truly did receive nearly double the amount the made last season to stick around for a few more seasons in L.A., it’s hard to argue that he made the right call. Now the pressure’s on to win, again.