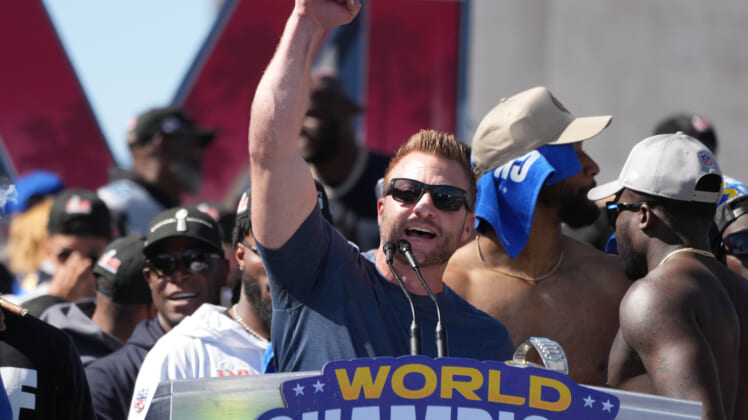 Ever since Sean McVay won Super Bowl LVI, rumors have popped up regarding a possible retirement for the 36-year-old head coach of the Los Angeles Rams. While the rumors were once squashed by about as trustworthy of a source as one could get, they have since come back around.

Maybe it’s due to the gigantic dollar amounts that are being tossed about, with rumors up to $15 million annually, which is nearly double his coach salary from the 2021-22 Super Bowl season. With those figures being offered, it’d be tough to turn down.

Especially in a world such as today. The NFL is as popular as ever and it only seems to be gaining more and more fans each season.

With that, being a head coach of one of the 32 pro football franchises comes with a lot of pressure. When you’re a coach of a high-profile market such as in L.A., paired with several elite players who are locks for the Hall of Fame, the stress level has to be high. Not to mention, they just won a Super Bowl, how do you top that?

By winning another apparently.

Sean McVay doubles down on quest to repeat with Rams

According to ESPN’s Adam Schefter, Sean McVay has told the network he won’t be pursuing any television or media gigs this season. His focus is 100% on the Rams, which means a repeat league championship is on the table.

While that may be the case this year, who knows what could happen if he and the Rams come up short in the 2022-23 football year? Maybe McVay will just decide to walk away, taking the fat check that comes along with talking football on TV as a Super Bowl-winning head coach.

For now, McVay’s planning on becoming the first franchise to repeat as Super Bowl champs since the 2003-04 New England Patriots, powered by Bill Belichick and Tom Brady. They certainly have the talent to get it done.

Related: Andrew Whitworth’s neighbor (Wayne Gretzky) may have talked him out of retirement