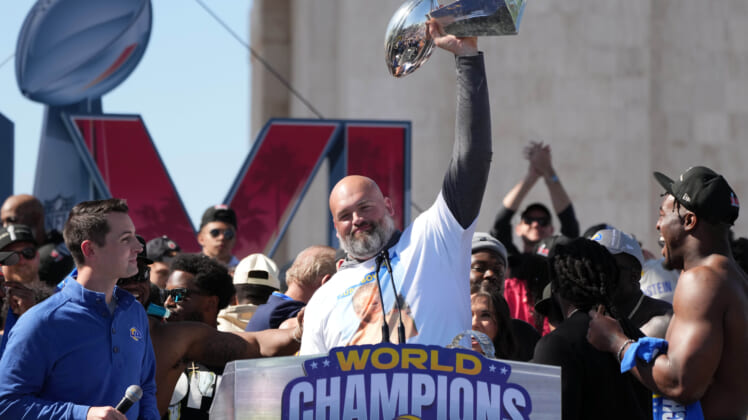 Well, Los Angeles Rams left tackle Andrew Whitworth finally accomplished one of his biggest goals, if not the biggest, which is winning a Super Bowl. After 16 NFL seasons, Whitworth had been expecting to call it quits, allowing him to walk away on top, with a shiny new ring.

After all, the guy is 40 years old for Pete’s sake. He’s the oldest offensive lineman to start in a Super Bowl and the oldest active NFL player after Tom Brady’s maybe retirement.

While retirement may have been at the forefront of Whitworth’s mind, that may no longer be the case, thanks to his neighbor, who I guess happens to be hockey legend Wayne Gretzky. Whitworth spoke to ‘The Great One’ shortly after winning his first league championship, and the NHL GOAT may have convinced him to go for two.

“I’ll never forget after we won the game, ‘The Great One’ Wayne Gretzky called me, cause I live out here near him in Sherwood (California),” Whitworth said. “He was like, ‘Hey Whit, there’s only one thing better than winning one, and that’s winning two.’ And I said, ‘You know what, I can’t argue with you.’ It’s gonna be tough. One way or another it’s gonna be a tough decision.”

He’s right. Who would argue with Gretzky? The dude held or shared a chilling 61 NHL records at the time of his retirement. By the way, he still holds 60 of those 61 records, a full two-plus decades past him hanging up the skates.

I’m not saying he should retire. In my random opinion, he and any other athlete who feels they can still play should continue to do so if they want to. In Whitworth’s case, his play on the field hasn’t slipped, as evidenced by being the starting left tackle on a Super Bowl team.

Even the analytics-based Pro Football Focus suggests Whitworth is still near the top of his game, after posting an 86.1 player grade this past season.

Meanwhile, off the field, Whitworth continues to make arguably just as big of an impact. He’s the reigning Walter Payton Man of the Year award winner for a reason. Having players with great character as Whitworth has is immeasurable within the locker room.

Plus, why not try and repeat? Can’t have your neighbors talking smack to you for the rest of your days, even if they are Wayne Gretzky.

Related: Los Angeles Rams’ Aaron Donald reveals what it will take from him to return in 2022