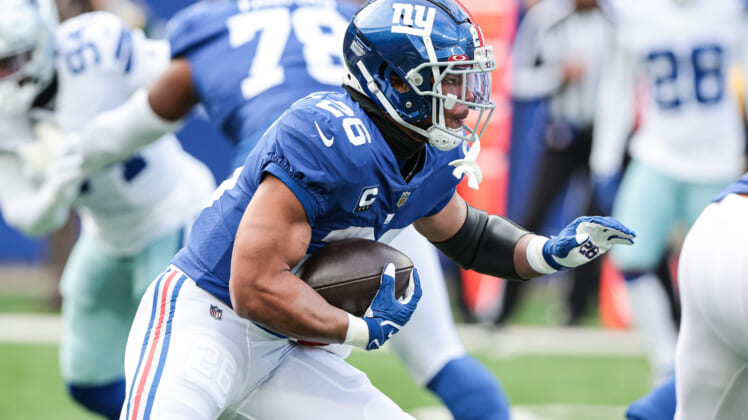 Saquon Barkley and the New York Giants haven’t had very many highlights this season. For a very brief moment, Giants fans had a reason to be excited on Sunday. On their second possession during their Week 15 matchup against the Dallas Cowboys, Barkley was able to show a glimpse of his impressive skillset thanks to a short pass from veteran journeyman quarterback Mike Glennon.

To no surprise, Glennon threw the ball a bit behind the running back, but Barkley adjusted on the fly, reaching his right arm out as his momentum took him toward the sideline to snag just the tip of the football for the reception. Unfortunately, the Cowboys were all over it and were able to stop Barkley after just a two-yard gain. However, it was just enough to stretch the sticks and get the first down.

Here’s the highlight, courtesy of Field Yates, so you can see what Barkley did for yourself.

While it may not have meant anything in the grand scheme of things, as it was just a short gain, it served as the latest reminder displaying some of what Barkley has to offer. Four plays later, the Giants got on the scoreboard with a 35-yard field goal kick from Graham Gano.

Barkley has had a disappointing year, but the hope is with each week he becomes more comfortable returning from not only his torn ACL suffered in 2020 but also his ankle sprain suffered in Week 5. This won’t help anyone from a fantasy football perspective, and it won’t look impressive in the box score, but the eye test still says SaQuads has a lot to offer.

The Giants will have a lot of decisions to make this offseason. Barkley is under contract through 2022 but is set to hit the open market after that. We’ll see how the 2018 Offensive Rookie of the Year can finish this season first.