Jimmy Garoppolo rebounded from a first-snap fumble to throw for 314 yards and Trey Lance tossed a touchdown pass on his first NFL attempt Sunday afternoon as the San Francisco 49ers held on for a 41-33 victory over the host Detroit Lions.

Still down 41-17 with 9:58 to play, Goff led a desperation rally that produced two touchdowns and a pair of two-point conversions, making it a one-score game at 41-33 with 1:10 left.

Detroit got a final possession after Samuel’s fumble, but stalled on downs at the San Francisco 24 in the final seconds.

Goff threw TD passes to T.J. Hockenson, D’Andre Swift and Quintez Cephus in his first game for Detroit, helping the Lions come within 442-430 of the 49ers in total yards in Dan Campbell’s debut as the NFC North club’s head coach.

Garoppolo dropped the ball on his first snap from new center Alex Mack, a fumble that turned into the 49ers’ first of three turnovers in the game when recovered by the Lions’ Jamie Collins Sr.

But San Francisco did little else wrong offensively until Samuel’s late fumble, starting with a 5-yard connection from Lance to Sherfield for the season’s first score after the rookie quarterback had entered the game in the red zone to provide a run/pass option. 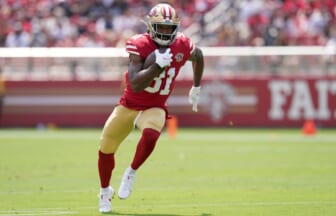 Goff threw 6 yards to Hockenson to draw Detroit even in the second minute of the second quarter, but the 49ers ran off to a 31-10 halftime advantage when Mitchell ran in from 38 yards and Hasty from 3, before Greenlaw returned his interception to the end zone just 70 seconds before the break.

Robbie Gould added a 40-yard field goal with eight seconds left in the half to increase the margin to 21.

Samuel caught nine passes for 189 yards, including a 79-yard catch-and-run TD in the third quarter.

Garoppolo completed 17 of 25 passes without an interception, while Mitchell, a sixth-round pick out of Louisiana, ran up 104 rushing yards on 19 carries.

Goff finished 38-of-57 passing for 338 yards and the one interception. Hockenson was his favorite target with eight catches for 97 yards and one score.