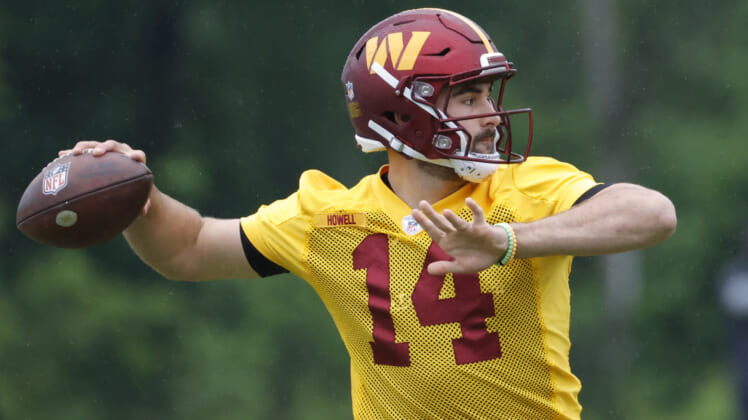 The Washington Commanders added two quarterbacks to the roster after not being pleased with the QB room a season ago. While Ryan Fitzpatrick’s season-ending hip injury couldn’t be predicted, they’ve realized the importance of having more depth at the position. Sam Howell joined the club after being the team’s fifth-round pick in April, and despite being just 21, the speed of the NFL hasn’t scared him away.

Typically players will describe the difference in speed as one of the major differences, going from college to the pros. In college you have several athletes hoping to reach the next level. Well, this actually is the next level.

You have the best of the best competing on every snap, with no plays off. For Howell, that means instead of facing a ton of unproven talent, he now has to go toe-to-toe with the likes of Aaron Donald, Micah Parsons, and Jalen Ramsey.

But as the rookie tells it, Howell hasn’t been overwhelmed with the speed of defenders just yet.

While he does understand he has yet to play in an actual game, so far, so good in training camp for the first-year pro. Maybe Howell will have a different take after the Commanders take on the Carolina Panthers on Saturday night. As a developmental QB prospect, Howell figures to get plenty of burn in the Commanders’ three preseason matchups this month.

While he has little to no shot at overtaking Taylor Heinicke for the backup duties, Howell can make a strong first impression with his teammates. Maybe someday Howell can become a starting QB, much like Kirk Cousins developed into after being a fourth-round pick with Washington back in 2012. Until he gets his first chance, the former North Carolina Tar Heel will continue to put the work in.

Related: Why the Washington Commanders should trade for Jimmy Garoppolo