Why the Washington Commanders should trade for Jimmy Garoppolo 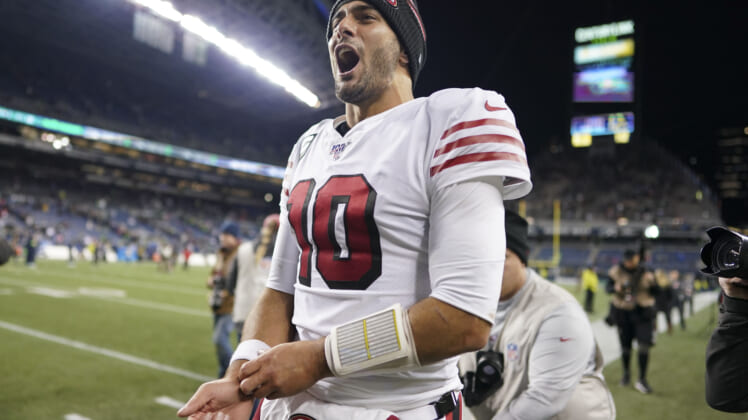 The Jimmy Garoppolo situation has yet to resolve itself. Clearly, the San Francisco 49ers are going full steam ahead with Trey Lance under center, and after trading up to make him the third overall pick in 2021, it’s the right move.

But Jimmy G is far too skilled to just stick around as a backup, and his presence alone would likely make things awkward during the transition to Lance. Only because if/when Lance struggles even in the slightest, the vets of the locker room may begin to whisper for change, bringing back the QB they have already experienced success with.

It’s no doubt a difficult situation, only made more complicated by Garoppolo’s $26.9 million cap hit in 2022. Teams mostly have their starting situations settled aside from three ongoing competitions around the NFL. The Commanders aren’t one of them, but if the price is right, maybe they should be?

Jimmy Garoppolo is a gamer

We’ve seen Carson Wentz lead a season in which his team ended with a Super Bowl victory, but he wasn’t the catalyst, and didn’t even play in the big game. Jimmy Garoppolo has actually played in a Super Bowl, losing by 11 points to the Kansas City Chiefs. But it wasn’t a fluke. He made it back to the NFC Championship game in 2021, falling a bit short once again.

But Jimmy G isn’t the player expected to put the team on his back, he’s more of a complementary piece. But isn’t that what the Commanders settled for by bringing Wentz aboard? He’s unlikely to return to the potential MVP form, but he can play at a high level for stretches. Same with Jimmy G.

Garoppolo won’t lose the game, and he may not single-handedly win them either, but he will keep your hopes alive until the very end. Which would be a drastic improvement for the Commanders. Consider that they were 7-10 a season ago, Garoppolo could likely coax a few extra wins out of this roster.

Honestly, he’d just be jubilated that another near-competitor is willing to hand him the starting gig, and for the Commanders, why shouldn’t they consider it?

I know it may look odd after also trading for Wentz, but he has admittedly struggled with accuracy early in camp, at the very least, Garoppolo would push Wentz, bringing the best out of each other. What we do know is that Garoppolo has brought his not only brought his team to the playoffs twice, he’s been successful, winning two games each time.

Isn’t that lightyears ahead of where the Commanders stand? Why aren’t they considered a true threat to land Jimmy G? If no one else steps to the plate, the biggest impediment may be clearing the cap space, but maybe that even comes in the form of Garoppolo tweaking his existing deal to land with what could be a playoff roster. Why not? Better than taking drastically less as a free agent, even if he doesn’t get to pick his next destination.

Everyone wants to feel wanted, and if the Commanders suddenly have a desire to bring in Garoppolo, he’d likely embrace them just as much. Garoppolo might even be an instant improvement over Wentz, which if that’s the case, the team would only be doing a disservice to their fanbase by not doing everything possible to look into Jimmy G.