Rudy Gobert trade to the Toronto Raptors, how it might work 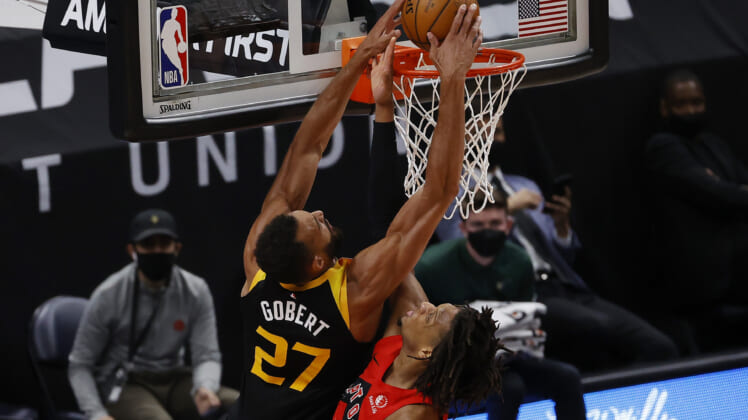 Following another disappointing end to their year after an otherwise successful regular season, there’s been plenty of speculation the Utah Jazz could break up their superstar duo of Donovan Mitchell and Rudy Gobert.

Since Mitchell is their primary scorer, and the Jazz offense runs through the 25-year-old guard, chances are the organization may be more willing to part with the 29-year-old Gobert instead.

Why do the Jazz want to trade Gobert? It could simply be a matter of time running its course. He’s been paired with Mitchell for the past five seasons, and while they’ve found success, they may have reached their ceiling, failing to get past the Western Conference Semifinals.

If a Gobert trade is the more likely outcome, there will be widespread interest in the Stifle Tower.

One team who’s believed to be intrigued by the idea of trading for the three-time Defensive Player of the Year are the Toronto Raptors according to NBA insider Ian Begley. Here’s how a potential trade agreement could work out.

What could a Rudy Gobert trade to the Raptors look like?

If the Raptors are serious about adding true size to their already lengthy lineup, Gobert would appear to be one of the best options available. At 7-foot-1, Gobert is one of the largest players in basketball who receives regular playing time, but that’s underselling his abilities.

Gobert is a reliable defender who grabs rebounds at an elite rate, grabbing 25% of all boards that come off the rim, a league leading number. A sound defender in the paint and around the basket, the Frenchman accomplishes all this while playing within his skillset offensively. He may not have shooting range, but Gobert also led the league in effective field goal percentage at .713%, proving his value on both ends of the floor.

It’s not like his skills are beginning to fail him, or that he’s lost a step. With his size, he’s never been considered fleetfooted or athletic, but that doesn’t prevent Gobert from being one of the best paint defenders in the NBA.

With the Raptors looking for another way to bring more talent into the organization, or at least rearrange their roster to allow them to matchup with larger centers, such as Joel Embiid, it appears as though Gobert could be the perfect solution.

With a Pascal Siakam trade likely off the table, the Raptors will have to find a different way to send enough salary out to match Gobert’s 2022-23 contract amount.

This would either take Fred VanVleet, Gary Trent Jr., or Scottie Barnes to be included in a trade, with a package of several others. There’s no way Barnes is available in any trade, so I’ll keep him off limits. Believing VanVleet and Trent are also key members of the core, OG Anunoby and first-round selections would appear to be their best trade ammo for Gobert.

Since the Raptors already traded their 2022 first-round pick, the largest chunk of this trade value comes from Anunoby, multiple future first round picks and clearing cap space. Is that enough to get the Jazz to bite? Probably not, which means the Raptors either don’t have what it takes, or they need to be willing to part with one of their other major pieces.

With likely several other teams competing for Gobert’s services, we’ll find out if the Raptors are truly serious about adding a big-time center next to Spicy P this offseason.