The Utah Jazz rumor mill seems to be pointing towards the team preferring to move Rudy Gobert instead of Donovan Mitchell this offseason.

After another strong showing in 2021-2022, where the team finished with a 49-33 record, won the Northwest Division and finished with the fifth-best record in the Western Conference, the Utah Jazz, unfortunately, went home in the first round of the NBA Playoffs.

There is no doubt that there is brilliance in the combo of Donovan Mitchel and Rudy Gobert. That classic combination of a talented big man and a gifted guard has helped to bring the franchise back to prominence. And the team has made the playoffs every single season the pair have been together. However, as much as it’s true they are great as a combo, this duo likely has hit a ceiling.

One of the major stories going into the 2022 NBA offseason will center on the future of Mitchell in Utah. He is the team’s best player, and with their recent history of underperforming in the playoffs, there is an assumption that he will look to escape Utah and ask for a trade. However, based on recent rumblings and speculation around the team, it seems like the Jazz desire a long future with Mitchell as the centerpiece of their franchise. The Athletic‘s Tony Jones explained as much last month after the team was eliminated by the Dallas Mavericks in six games.

“The Jazz, according to sources, are committed to building around Donovan Mitchell, which means taking a step back isn’t an option,” he wrote. “Utah would like to keep climbing the mountain toward contention, and the Jazz feel like they still aren’t that far off, despite the disappointment of this season.”

Clearly, the organization realizes this group of players won’t get them to where they want to be. Change seems to be coming, and ESPN NBA insider Brian Windhorst confirmed that likelihood as not only an attempt to improve the team but also to keep Mitchell happy and in the organization long-term.

“My feeling is that Jazz are going to do some level of overhaul that does not include Donovan Mitchell in an attempt to make Donovan more comfortable,” Windhorst said on a recent edition of his “Brian Windhorst & The Hoop Collective” podcast. “And that could work. It could work but it’s going to be difficult.”

Outside of Mitchell, the Jazz have three trade pieces that other teams would seriously consider acquiring. Gobert, Bojan Bogdanovic, and Jordan Clarkson. However, there is but so much that Bogdanovic and Clarkson will get them in a return with the team not having a first-round pick in 2022 to add to a deal. Meaning Gobert is the biggest chip they could play. 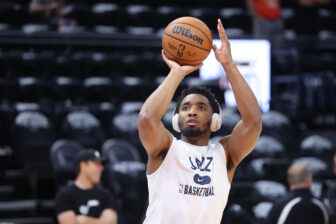 Unfortunately, the NBA is geared to small ball and the era of centers being a key factor on a championship team has diminished greatly. If the Jazz truly wants to “overhaul” the team and give Mitchell a running mate more in line with top teams today, Gobert is likely the odd man out and the best piece they have to land a worthwhile addition.