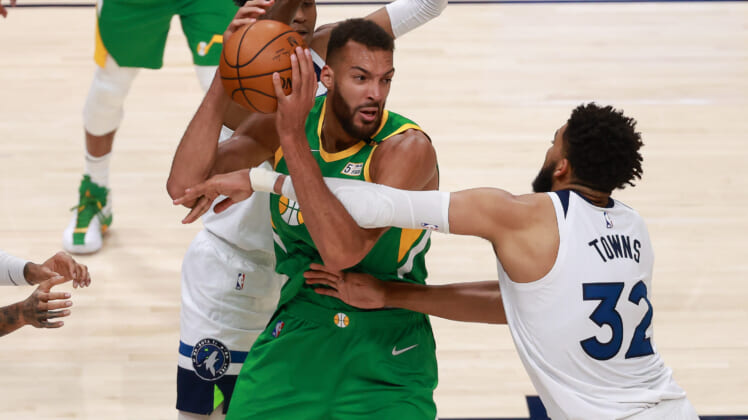 Following another premature playoff exit, there’s now a good chance that the Utah Jazz will pull off a Rudy Gobert trade this summer.

It’s becoming increasingly clear that the Gobert, Donovan Mitchell pairing is not going to lead Utah to championship contention. It’s also now time for Utah to break up this pair after Gobert struggled to the tune of 12.0 points per game in a first-round NBA Playoff matchup against the Dallas Mavericks.

We fully expect Jazz general manager Justin Zanik to look for a star to team up with Mitchell rather than building around an offense-limited Gobert. The multi-time NBA Defensive Player of the Year winner will also draw a nice amount of interest on the trade block this summer. Below, we look at three ideal Rudy Gobert trade scenarios.

The Toronto Raptors first-round playoff loss to Joel Embiid and the Philadelphia 76ers showed us that this team is close to competing for a conference title. The trio of Fred VanVleet, Pascal Siakam and reigning NBA Rookie of the Year Scottie Barnes is spectacular.

Unfortunately, said series also showed us how much they are limited in the low-post. Embiid was his normally dominating self. Being able to add one of the best low-post defenders of his generation would be absolutely huge for Nick Nurse’s squad. It would also make Toronto legit title contenders.

The cost of doing business here would be giving up a home-grown talent in that of OG Anunoby as the centerpiece heading to Salt Lake City. For the Jazz, he would be able to provide that scoring option behind Mitchell. Having improved every season of his five-year career, Anunoby is coming off a 2021-22 campaign that saw him average 17.1 points while shooting 36% from distance. As for Trent Jr., he’s fully capable of scoring 20 points per game. This past season saw the wing average a career-high 18.3 points per. 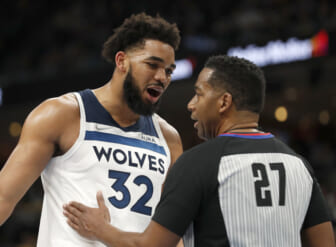 Also Read:
Minnesota Timberwolves have a ‘big’ problem and it all starts with Karl-Anthony Towns

Simply put, Anthony Towns was an enigma for the Wolves in their first-round series loss to the Memphis Grizzlies. As this young team competed with one of the best squads in the NBA, he struggled doing anything of substance. Towns averaged 21.8 points (2.8 fewer than the regular season). He was also as inconsistent as they get, scoring a total of 23 points in Game 2 and Game 3. You can’t have that from your “star player” if you want to compete with the big boys.

A lot has been made of KAT’s issues on defense. By moving off him for Gobert, the Timberwolves would be solving that equation big time. It’s also not like this team lacks scoring with the likes of D’Angelo Russell and Anthony Edwards doing their thing. Gobert is simply a better fit for this iteration of the Wolves.

As for Minnesota, it gets an All-Star center who can score 30 on a consistent basis. As we saw in the Dallas series, Gobert just isn’t capable of doing that. Sure the Jazz’ defense would be limited by acquiring Towns, but he’s a much more dynamic player to team up with Donovan Mitchell. This is a deal that would be seen as a win-win for both squads.

Rumors have persisted over the past couple weeks that Golden State plans to make a push for Gobert. Regardless of how the remainder of the playoffs go, we fully expect that to happen this summer.

Gobert might be the best fit these Warriors could ask for. They’ve struggled with low-post defense. Kevon Looney is solid, but he doesn’t bring a whole lot to the table. Meanwhile, James Wiseman just hasn’t been able to stay healthy. Teaming Gobert up with Draymond Green inside with the likes of Stephen Curry, Jordan Poole and Klay Thompson would keep the Warriors’ championship window wide open.

As for Utah, it brings in two young lottery picks in that of Wiseman and Moody. Both boast a great amount of upside. If Wiseman can remain healthy (a big if), he has an All-Star caliber skill-set. The Jazz also add one of the better wing defenders in the NBA in that of Andrew Wiggins who can average 20 points per game.

Bringing in a first-round pick and these youngsters could also help Utah pull off another trade for a star to team up with Mitchell and Wiggins. Perhaps, someone like Zach LaVine in a sign-and-trade could make sense.