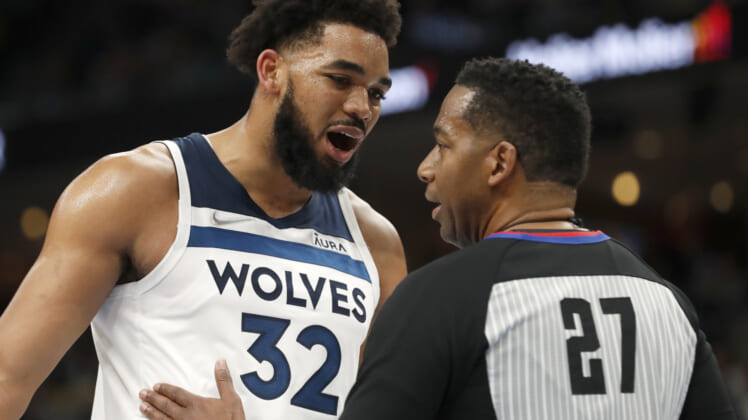 The Minnesota Timberwolves have played one play-in and three playoff games thus far in 2022. Karl-Anthony Towns has only shown up for one of these matchups, with foul trouble playing a big factor in causing early frustration for the 2022 3-Point Contest champion.

When it happened in the play-in, head coach Chris Finch was willing to brush off the struggles from one game. This is mainly due to how consistent KAT has been throughout his career. As Finchy noted, Towns has rarely had any duds in his career, let alone in back-to-back performances.

That’s not necessarily what happened in Game 2 either. KAT didn’t have a complete dud of a game, but he also didn’t play up to the standards that are to be expected from a member of the 2021-22 All-NBA team.

Upon first glance, his numbers aren’t even bad. But it was the way he played throughout the game that brought up bad memories of his play-in performance, when Towns fouled out after playing just 24 minutes.

Game 3 was even worse.

At the top, we shared a quote from coach Finch mentioning how Towns rarely has bad games. After dropping back-to-back deuces, times have since changed for KAT in the playoffs.

Towns committing five fouls cannot keep happening if he wants to help lead his team past the first round of the playoffs. Which, if Game 1 were any indication, the Wolves have a definite chance of knocking off the Grizzlies, but not if KAT can’t keep his head in the game.

The issue is the manner in which he gets some of his fouls, as Finch called one of them from Game 2 “unnecessary”.

He’s right. Despite KAT’s stubbornness, there’s absolutely no need to kick out your leg when shooting a three. It’s only likely to get yourself hurt, or turn the ball over while getting yet another foul. Insult to injury.

That is a frightening take from the best shooting big man of all time. As we’ve seen, kicking out his leg isn’t a necessity, he did it because of the situation. Which is a habit he needs to kick, immediately. It’s cowardly, it’s childish, and it only does more harm than good.

The sad part is Towns fouling a lot isn’t a new concept. He committed the second-most fouls per game this season, averaging 3.65 per contest. A player who has few weaknesses, if any, it’s easy to say the part of his game that needs the most work, is all mental.

At 26, now in his seventh season, Towns should know better than to try these silly gimmicky moves. Patrick Beverley gets away with being a pest, but that’s who he is, and at the end of the day, he’s not one of the three most important players on the roster, but Towns is.

As coach Finch says, it places the Wolves in a tough spot when one of their best players constantly finds himself in foul trouble. That much is obvious.

Timberwolves can’t afford to have KAT on the sideline

Maybe KAT’s foul problems wouldn’t be such a big issue if backup center Naz Reid didn’t suffer from the same issues. In the play-in, Reid was spectacular in his role scoring eight points off the bench while grabbing four rebounds (two offensive), and dishing out an assist. The most telling stat, was the +17 he finished with across 21 minutes, which was a team-best.

Towns on the other hand, finished with a team-worst -14 plus/minus.

The issue lies with Reid’s inconsistency and the lack of depth the Wolves have at center behind Towns. Nobody constructed this roster with the idea to have a top backup center when the starter plays 34.2 minutes per game. It wouldn’t make sense.

When Towns suffered through his issues in the play-in, it was the Nazmanian Devil who came through in the clutch, helping the team get into the playoffs. In Games 1 and 2, Reid was a nightmare, often looking overmatched and clumsy with some positive shots mixed in.

In Game 1, Reid played just five minutes as he too got in early foul trouble somehow collecting three fouls and three turnovers in such a small timeframe. Game 2 was better as a whole for Reid, but he still got off to a rough start, committing three fouls once again and turning the ball over two more times.

If Towns didn’t get behind in the count, Reid could come in and be as aggressive as he needs, but when Towns is already down and out, Reid’s mistakes are only magnified since the man he replaces dives into the same pit.

The Wolves also have Greg Monroe at the backup five, but Reid has earned his role throughout the season. Let’s not try and place the problems on a backup, when it’s easy to see a concerning lack of discipline from one of the team’s max contract players who is supposed to set the table for others.

Simply put, when KAT digs a hole, forcing himself out of the game, the Wolves need Reid to step up in his absence. But it shouldn’t come down to Reid, a backup five, for the T-Wolves to advance, it starts with Towns being a team leader.

So far, we haven’t seen that consistently enough. One season helping the team reach the playoffs is a nice start, but for the narrative to change about Towns for good, he needs to stop whining, stop complaining and just play some basketball. Blind or not, let the referees do their job and you do yours. The Wolves will be much better off in the end.