If you asked Minnesota Timberwolves star forward Anthony Edwards, the youngest group of Memphis Grizzlies fans are some of the meanest.

Edwards and his team had reason to smile following their surprise 130-117 win over the second-seed Grizzlies on Saturday. Especially, the 20-year-old, as he had a career night in dropping 36 on MVP candidate Ja Morant and his Memphis squad.

So it should come as no surprise as Edwards was lighting up the Grizzlies he was earning the ire of the team’s supporters inside Tennessee’s FedEx Forum. However, one thing that is a bit of an eyebrow-raiser is the information that some of the rudest members of the Memphis crowd were allegedly its youngest members.

The Athletic’s Timberwolves beat writer Jon Krawczynski tweeted several quotes from Edwards’ post-game press conference. One of them was in regards to why Edwards enjoys playing in Memphis so much, and oddly enough it’s because of the trash talk that comes from the crowd. Even from the angry youth in the arena.

“Because they talk so much trash,” Edwards said about what makes games in Memphis fun. “Even the kids. The kids was the worst ones. Even eight years old, 10 years old, ‘Anthony go sit down! You suck!’ It’s just fun. Basketball is fun to me. I love it.”

The top pick in the 2020 NBA draft’s performance was historic as he became the third-youngest player in league history to score 35-points or more in a playoff game. Derrick Rose and Tyler Herro are the other two.

Throughout the game, Edwards made a wide array of shots from all over the court and quite a few with a high difficulty. The team’s top player Karl-Anthony Towns lauded his young teammates’ performances and shot-making skills after the game. 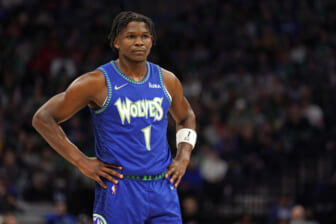 “For him to be able to take multiple dribbles in the playoffs and still get to his spot and make a shot, it’s something that’s special,” Towns told reporters after the game [h/t ESPN]. “Because once you’re in the playoffs, usually the one-on-one dribble drives get taken away, and he’s still finding ways to get there. He’s a special talent.”

Game 2 of the Timberwolves vs Grizzlies series is one of the NBA games today for Tuesday.