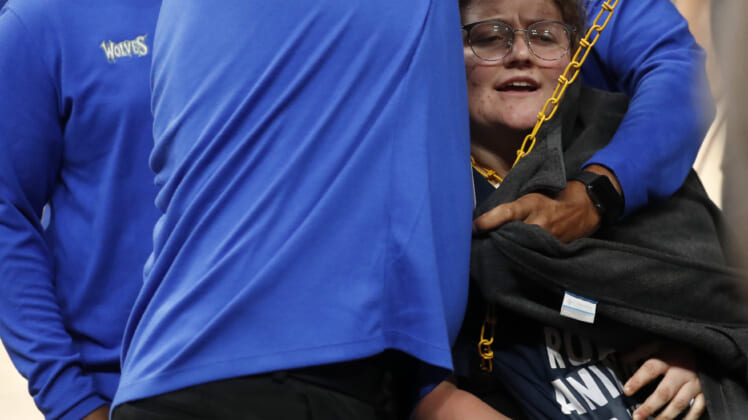 People are really going at Minnesota Timberwolves owner Glen Taylor. First, it was Glue Girl stopping play during their play-in game, but that took place at the Target Center in Minneapolis. Now it’s Chain Girl. The latest stoppage happened in Memphis during the first round of the playoff series with the Grizzlies.

A woman, who appears to be a part of the same group as Glue Girl, managed to chain herself to a structure under the basketball hoop as Grizzlies guard Dillon Brooks prepared to shoot a free throw in the second quarter.

Cameras showed a woman pull her initial top off which revealed a shirt that read “Glen Taylor roasts animals alive“, which is the same shirt that Glue Girl had on during her unique protest. This has to do with Taylor owning a factory egg farm which is recently believed to have killed a large amount of chickens due to the bird flu.

The issue the protesters have is how the company is going about it. According to Glue Girl, Taylor’s company is doing so via the process of “ventilation shutdown” which is viewed as an inhumane way to deal with the matter.

After about 30 seconds the chain was removed and play resumed as security carried the protesting Chain Girl away.