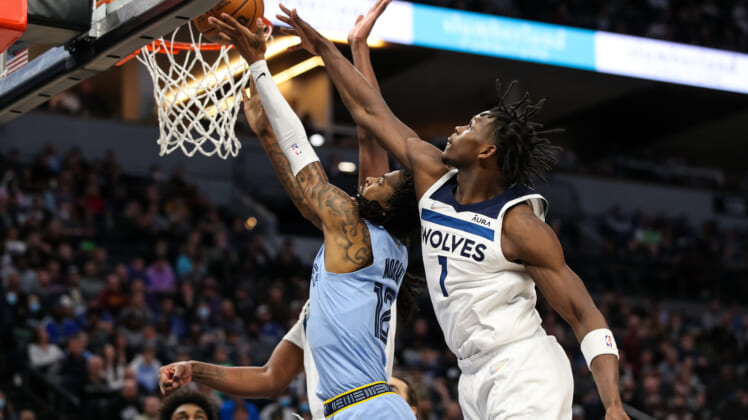 For NBA fans, getting a chance to see the Memphis Grizzlies take on the Minnesota Timberwolves in a best-of-four playoff series will be a joy to watch.

From Ja Morant, Desmond Bane, Jaren Jackson Jr., and Dillon Brooks in Memphis to Karl-Anthony Towns, Anthony Edwards, D’Angelo Russell, and Patrick Beverley in Minnesota, there are plenty of fascinating athletes to draw our attention. With the top-scoring team (Timberwolves at 115.9) taking on the team scoring the second-most points per game this season (Grizzlies at 115.6), it should be a high-scoring affair.

Here are three of the biggest storylines as the two up-and-coming teams head into their first-round playoff series in which the (2) Grizzlies are seen as the favorites over the (7) Timberwolves.

Will Patrick Beverley get into the heads of the Grizzlies?

If there’s one identifying trait Patrick Beverley has been known for over the years, it’s his ability to get under the skin of his opponent. An annoying, yet intimidating presence, Beverley is a hounding defender, which is fitting considering his favorite player is former Wolves great Kevin Garnett. Though you won’t see Pat Bev slap the paint (though it would be awesome), he’s often among the first involved whenever something unusual happens on the court, even if it’s from Glue Girl.

Unlike the last opponent Beverley faced, the point guard doesn’t have history with the Grizzlies, though he did spend a few days on their roster after being traded from the Clippers, though he was never destined to stay.

As far as whether his antics will be as effective against Memphis as they were against the Clippers, well Griz star Ja Morant doesn’t appear ready to back down any time soon.

We’ll see whether his words ring true, but chances are, the Grizzlies will be more prepared for whatever Beverley has in mind.

Related: Bud Light offers to make Patrick Beverley ‘Bev Light’ beers with ‘Take they ass home’ on the can

Is Ja Morant ready for his first playoff series win?

There’s no question Ja Morant is already one of the top-25 players in the NBA. He might even win most improved player for his effort this season. One thing the 2019-20 Rookie of the Year hasn’t accomplished is win a playoff series.

Still just 22, Morant does have five games of postseason experience, but managed to win just one game against the Jazz a season ago. Now playing the role of Goliath being the higher seed instead of entering as the No. 8 seed as they did against Utah, it’s Morant’s chance to prove the Grizzlies are a serious Finals contender.

Morant has shown he can do it all on both ends of the floor with Ja-dropping highlights, but in a series where he’s fully expected to win, can he continue to deliver in the biggest moments of his young career? He’ll have plenty of support, but in the end this series falls on Morant’s shoulders. He appears more ready than ever to advance to the latter stages of the NBA playoffs, but it all begins this weekend.

Can Karl-Anthony Towns bounce back from pathetic play-in performance?

If Taylor Jenkins and the Grizzlies can take anything from KAT’s play-in effort, it’s that he tends to take himself out of the game, if you let him. It all began on offense, where Towns got three offensive fouls. Once his frustration began, whether toward the referees or internally, it was over mentally for the smooth-shooting big man. With the Clippers placing a strong effort on going after Towns, forcing him to make a play at the rim, he couldn’t come through. Towns fouled out after seeing just 24 minutes of court time.

For the Wolves to have a chance in what will be just their second playoff series in the past 18 years, Towns will have to be smarter from the jump. The Wolves have enough star power to stay afloat and even come through in the clutch without their star center as they did against L.A. but this can not become a habit. He knows that.

At their best, with their trio of scorers plus their two strong defenders in Jarred Vanderbilt and Pat Bev, the Wolves can do some damage and just might surprise some by taking down the Grizzlies, but it all starts and ends with Towns staying out of foul trouble and keeping his head in the game, not on the whistle.