Glue Girl: Find out why a woman glued her hand to the floor at Timberwolves NBA play-in game 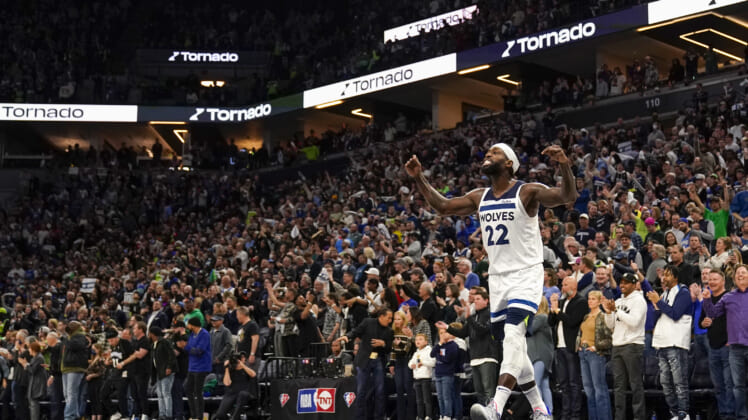 The story of Glue Girl. So, you might have heard, there was a play-in game Tuesday night between the Los Angeles Clippers and Minnesota Timberwolves, taking place at the Target Center in downtown Minneapolis.

While it was an eventful, back-and-forth battle that was intense from the very start, there was another story that stole the show and it had nothing to do with Karl-Anthony Towns’ foul trouble, the strong play from Anthony Edwards and D’Angelo Russell, or the passionate post-game antics of Pat Beverley. No, we’re talking about the infamous “Glue Girl“.

Aside from the Timberwolves playing for a chance at the playoffs for just the second time in 18 years, it appeared to be a fairly normal night in the Twin Cities. Then, in the second quarter, everything changed, when out of nowhere a fan appeared to take the court.

At first, announced believed a stadium employee had fallen to the court and maybe suffered an injury. Then, the rumors of a fan somehow slipping onto the court had emerged, but neither of these cases were the actual story.

Instead, a crazed fan burst her way onto the court and believe it or not, attempted to glue her hand to the hardwood floor. It was a bold attempt, to say the least, with thousands of spectators in attendance and millions more watching across the world. But what was Glue Girl trying to accomplish? Surely, she had to have a reason for wanting to seek so much attention, enough to stop play altogether. So why did Glue Girl try to glue her hand to the floor?

In one of the wildest stories of our recollection, a woman named Alicia Santurio, you know her as Glue Girl, was incensed with the actions of Timberwolves owner Glen Taylor and decided to protest his actions.

Santurio, or Glue Girl, was seen wearing a shirt that read “Glen Taylor roasts animals alive” when she made her NBA debut. OK, so what does she know?

Taylor owns a factory egg farm which recently has been mass killing chickens due to the current bird flu. According to Santurio, Taylor’s farm killed five million birds using a process known as “ventilation shutdown” or “VSD”.

Honestly, kind of amazed that she’s not being interrogated or some other ridiculous process, but shortly after likely getting ejected from the game and who knows what else, Glue Girl took the time to explain herself a bit further, and by all appearances, she has a great attitude about the night’s events, giving everyone a lasting memory.

Look, most people are going to say this woman is absolutely nuts, and sure, her methods are not normal. You can criticize her for her approach (trying to glue your hand to a highly polished floor with less than 60 seconds) all you want, but she’s taking action about an issue she’s clearly passionate about. Check out the video, they make some valid points. Even though no one will remember their agenda, it will always be known as the time a woman tried to glue her hand to the floor, but there was a much greater point she was trying to make.

To her credit, she seems to be embracing the new nickname she’s earned, laughing about her new Glue Girl moniker. Like anyone else looking to raise awareness, she tried an unconventional method. Unlike the concepts she’s upset about, Santurio didn’t hurt anyone.

But for anyone paying attention, don’t try and run onto a professional sporting event, chances are you may end up in jail and it really is incredibly stupid. Santurio got lucky here, but she got her message across and that’s probably all that matters to her.