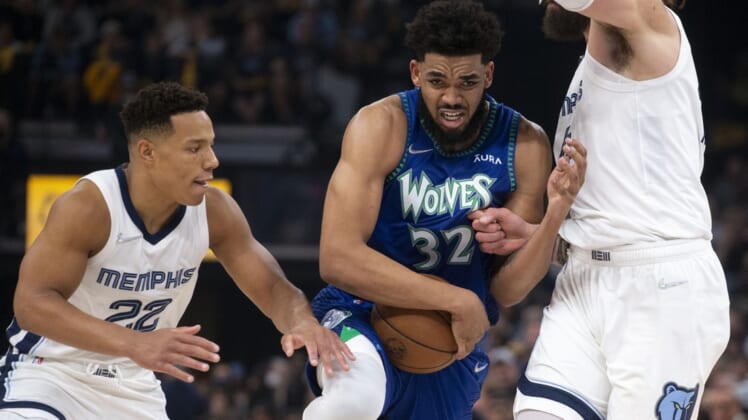 Patrick Beverley and Jaden McDaniels hit late 3-pointers, capping a dominant performance by the Minnesota Timberwolves from beyond the arc, as the seventh-seeded visitors stunned the Memphis Grizzlies 130-117 in Game 1 of their Western Conference first-round playoff series Saturday afternoon.

Anthony Edwards outscored Memphis star Ja Morant 36 to 32 and Karl-Anthony Towns chipped in with 29 of his own as the Timberwolves, who needed a play-in win over the Los Angeles Clippers just to make the playoffs, stole the home-court advantage in the best-of-seven matchup.

Morant led the Grizzlies in scoring and assists with eight, but missed his only two 3-point attempts as second-seeded Memphis was outscored 48-21 on 3-pointers.

Already having demonstrated they could play with a 56-win club by splitting the four-game season series, the Timberwolves exploded out of the postseason gates for 41 points in the first quarter to go up by as many as 13. Edwards had 13 of his 36 points and Towns 12 of his 29 in the opening 12 minutes.

Memphis led only briefly after that, and never got better than even in the second half. But when Morant made one of two free throws with 3:16 remaining, the Grizzlies had the ball, down just 114-109.

But McDaniels blocked a Desmond Bane 3-pointer and Beverley countered at the other end with his own three, turning a potential two-point game into a 117-109 Timberwolves advantage with just 2:42 to go.

Edwards and Malik Beasley, who contributed 23 points off the bench, hit four 3-pointers apiece for the Timberwolves, who shot 16 for 41 from deep as a team. Memphis went just 7 of 27.

Dillon Brooks had 24 points and Bane 17 for the Grizzlies, who lost despite getting to the free throw line 43 times, making 32.

Brandon Clarke put up a 13-point, 12-rebound double-double, while Jaren Jackson Jr. added 12 points for Memphis, which surprised the top-seeded Utah Jazz on the road in Game 1 last season before losing the next four straight.