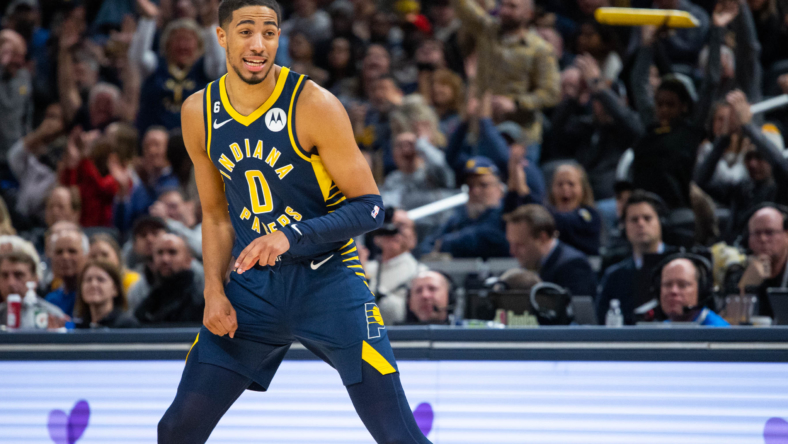 The Indiana Pacers arguably made their best trade at the 2021 trade deadline. They traded away two-time All-Star Domantas Sabonis, Jeremy Lamb, Justin Holiday, and a 2027 second-round pick to Sacramento. In return, the Pacers received Buddy Hield, Tristan Thompson (only for a cup of coffee), and point guard Tyrese Haliburton.

Really, the main players in this trade that the average NBA fan cares about are Haliburton, Sabonis, and Hield. And it’s these three guys that get talked about the most. Subsequently, we’re only going to focus on Haliburton in this piece.

Hailing from Oshkosh, Wisconsin, the 6-foot-5, 175lb. point guard committed to Iowa State. Coming into college, he was rated as a three-star prospect. For those that don’t know, five-star or Blue Chips are the ones that usually headline the recruiting class. He played two seasons where he earned All-Big 12 in his final year.

While at Iowa State, Haliburton played a total of 57 games and averaged 10.1 points, 4.4 rebounds, and 4.7 assists on 50.9% shooting. After fracturing his left wrist in his final season, he declared for the 2020 NBA draft. There he was selected 12th overall by Sacramento. He would finish third in Rookie of the Year voting and be named to the NBA All-Rookie First Team.

Haliburton’s thrived since arriving in Indiana

As previously mentioned, he was traded to Indiana with Hield and Thompson. The thinking around the league was that Thompson would be bought out or released. And Hield was mainly included, as a throw-in, to make the salaries match. Almost all Pacers fans, and any NBA fans, would love to get a player of Hield’s abilities included as a throw-in.

Since arriving in Indiana, both Haliburton and Hield have been great additions to the organization. Haliburton is thought of so highly that the Pacers have said they plan to build around him and consider him to be their next Reggie Miller. Of course, when you are the 12th overall pick and lead your draft class in win shares (13), it makes sense to call him a franchise cornerstone.

It’s not surprising that an organization would say they want to build around you. And that’s exactly what they’re doing. In this most recent draft class, the organization drafted Bennedict Mathurin to pair up with Haliburton and be the team’s backcourt of the future.

At the end of last season, Pacers fans got a glimpse of what Haliburton could bring to this franchise.

*all career highs prior to this season

A rare trade that works out well for both teams

Looking back on this trade, it is fair to say it was a win-win for both teams. Sacramento finally got a big-man threat that they’ve been trying to get for years. And they unclogged their guard-heavy roster. Meanwhile, the Pacers unclogged their big-man-heavy roster and got their point guard of the future. As of right now, both teams would be in the playoffs.

Now, in Haliburton’s first full season with the Pacers, he’s having an All-Star-level year. And he’s got the team on a five-game streak, with some fans abandoning the thought of tanking the season. It’s still just a little bit too soon to really start thinking about the playoffs. There are still some questions that need to be answered that will impact the outcome of this season.

However, Haliburton has brought a positive outlook for the Pacers’ future. And the team is fun and entertaining to watch. His play is effortless, and his vision is one of the best in the league. Pacers fans need to enjoy watching him play. He’s a very special talent.