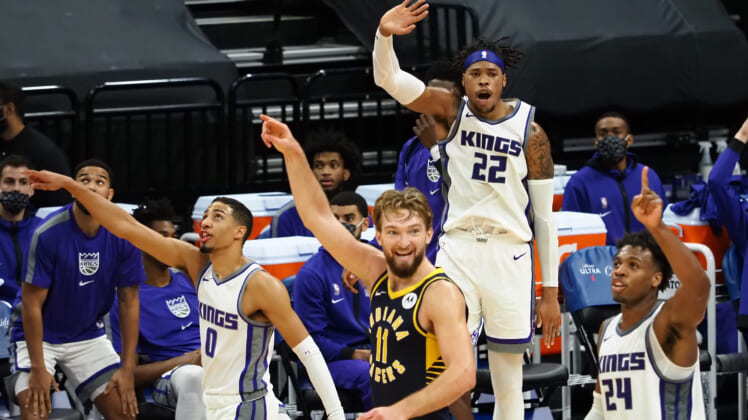 The Sacramento Kings and Indiana Pacers swung a blockbuster trade on Tuesday, swapping Tyrese Haliburton and Domantas Sabonis in what may go down as the biggest move of the NBA trade deadline.

When the Kings backed away from trade talks for Ben Simmons, largely because the Philadelphia 76ers set a huge asking price surrounding Tyrese Haliburton, many assumed the young guard would stay. But with general manager Monte McNair seemingly desperate to make a big move and one All-Star forward available, he pulled the trigger on Tuesday.

It’s a move that will have significant long-term implications for both teams. Indiana begins a complete retool and Sacramento gets better immediately, landing arguably their most talented player since DeMarcus Cousins.

With that in mind, let’s examine the winners and losers from the Tyrese Haliburton, Domantas Sabonis trade.

Indiana likely never expected this to happen. The asking price to move Myles Turner was through the roof and NBA general managers knew the Pacers were even higher on Sabonis. With less than 72 hours until the trade deadline, many assumed the All-Star forward would stay in Indiana. Then, the Kings put Haliburton on the table.

Viewed as the steal of the 2020 NBA Draft, the 12th overall picked showed flashes of becoming a franchise player in Sacramento. He thrived with De’Aaron Fox out of the lineup, facilitating offensively and showing a nice ability to score efficiently. Coming off a 17-assist performance on Feb. 5, Haliburton averaged 16.1 points, 8.9 assists and 1.6 steals per contest in his last 31 games.

In just the second year of his rookie contract, the 21-year-old could thrive with the Pacers. Tyrese Haliburton will serve as the lead guard, filling a void that has existed for years. If he continues on his upward trajectory, the Pacers could have a multi-time All-Star leading this franchise for years to come.

Desperation leads to bad decisions. Monte McNair has also been burned before. The Kings and Milwaukee Bucks agreed to a sign-and-trade for Bogdan Bogdanovic in 2020, a deal that would have sent Donte DiVincenzo to Sacramento. But another team went to the NBA with tampering charges and the trade never went through. A year later, McNair had a Buddy Hield trade arranged with the Los Angeles Lakers. Suddenly, Los Angeles pulled out at the last second and acquired Russell Westbrook. 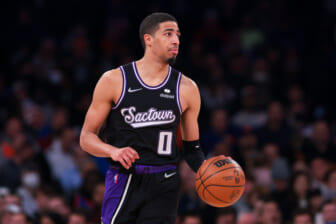 Feeling the pressure to snap a historic playoff drought, McNair first went after Simmons. When it became clear the 76ers wouldn’t move him unless Sacramento grossly overpaid, he pivoted. Unfortunately, he went too far. Haliburton is the king of young, cornerstone player the Kings desperately needed to keep. De’Aaron Fox, signed to a max extension, became more expendable than the second-year guard.

Indiana rejected a Sabonis trade centered around Fox, an understandable decision. But McNair’s call to relent, giving Haliburton away, will haunt this franchise for years.

It’s fair to describe the first season of the De’Aaron Fox contract as a massive disappointment. Making $28 million this season, still owed another $134.9 million over the next four years, his play has regressed. Injuries have been a problem, but regression from the perimeter (32.3% to 24.8%), reckless play and poor decision-making have made this a season to forget.

Now, Fox gets the equivalent of a fresh start. There will be challenges sharing the basketball with Sabonis, who is far more of a facilitator than a shooter. But Fox gets to be the lead guard now, returning to the dominant role that drew some All-Star consideration in the 2020-’21 season (25.2 ppg, 7.2 apg, 1.5 spg).

Fox isn’t the only Kings’ guard who benefits from this deal. With Tyrese Haliburton and Buddy Hield gone, a starting spot opens for Davion Mitchell. Selected with the No. 9 pick in the 2021 NBA Draft, the rookie gets to slide into a starting role. It’s a huge boost for a player who often played fewer than 25 minutes per game when everyone was healthy.

Fox and Mitchell are both winners right now. Fittingly, there is still a problem for the Kings. Neither play are dependable shooters, creating a huge void every time the two guards take the court.

Buddy Hield wanted out of Sacramento years ago. Finally, he was going to get his wish this offseason. Playing for the Lakers would be a dream scenario. Sharing a court with LeBron James and Anthony Davis, he’d have fantastic facilitators who could set him up for wide-open perimeter shots. Best of all, the hyper-competitive guard would join a playoff contender with championship aspirations. Then the Lakers nixed the trade, keeping him in Sacramento.

Indiana won’t be much better. Hield’s lackadaisical defensive effort will cause some issues with head coach Rick Carlisle. To make matters worse, he’s jumping from a 20-35 team to a Pacers’ roster in transition with 19 wins and no plans to contend this year. That’s a bad combination for Hield.

Of course, the veteran guard is used to being in a bad environment and issues with coaches aren’t new. But moving from Northern California to Indiana in the winter, that’s just the icing on a bitter cake for Hield. He’s free of Sacramento, but things didn’t get any better for him.