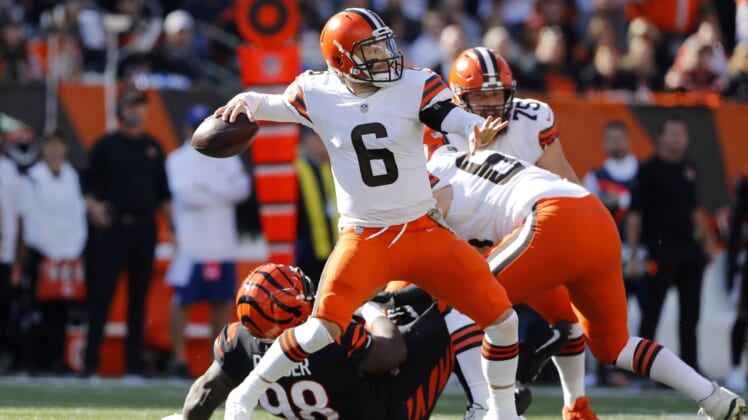 The visiting Cleveland Browns got by just fine without Odell Beckham Jr. and blasted the Cincinnati Bengals 41-16 Sunday at Paul Brown Stadium.

Nick Chubb rushed for 137 yards and two touchdowns on just 14 carries and Baker Mayfield finished 14-of-21 passing for 218 yards and two TDs. The Browns (5-4) turned three Cincinnati turnovers into 13 points to win for the sixth time in the last seven meetings against their in-state and AFC North rival.

Cincinnati (5-4) has lost two straight. Joe Mixon totaled 110 yards on 18 touches and scored two TDs on the ground. Joe Burrow completed 28 of 40 passes for 282 yards, but he was intercepted twice and failed to throw at least two touchdowns in a game for the first time this season. Sensational rookie WR Ja’Marr Chase had six catches for 49 yards but was kept out of the end zone and lost a fumble in the first half.

Cleveland led 34-10 after three quarters despite running just 29 offensive plays. Chubb burst through for a 70-yard touchdown in the middle of the quarter, and the Browns cashed in Burrow’s second interception with a 24-yard Chase McLaughlin field goal with 5:14 left in the frame.

Mixon scored his second TD, a 2-yard run, with 13:51 left but the Bengals failed on the 2-point conversion. Mayfield finished the scoring with an 18-yard touchdown to David Njoku with 4:27 remaining.

The Browns ran just 15 plays in the first half and were outgained 249-160, but still led 24-10 thanks to a pair of takeaways that generated 10 points.

Cincinnati’s first drive was clicking along, but ended with Burrow’s interception at the 1-yard line. Denzel Ward stepped in front of an out route and raced 99 yards the other way untouched for a 7-0 lead.

The Bengals ultimately ran the game’s first 20 offensive snaps, and tied it 7-7 after Mixon’s 11-yard TD run with 4:10 left in the opening quarter.

Chubb scored from the 1-yard line to cap the Browns’ first offensive drive and make it 14-7 early in the second quarter. After stuffing Cincinnati on fourth and short, Cleveland scored on the next play when Mayfield launched a 60-yard touchdown to Donovan Peoples-Jones and a 21-7 lead with 10:10 left.

Chase’s lost fumble led to McLaughlin’s 28-yard field goal with 4:10 left in the half. The Bengals got points just before the half ended, on Evan McPherson’s 27-yard field goal, to make it 24-10.