Russell Wilson completed 30 of 37 passes for 231 yards and two touchdowns and the Seattle Seahawks made a goal-line stand in the final minute to snap a three-game losing streak with a 30-23 victory against the visiting San Francisco 49ers on Sunday.

Adrian Peterson scored on a 1-yard run in his debut for the Seahawks (4-8). It was his 126th career touchdown, tying Jim Brown for 10th on the NFL’s all-time list.

San Francisco took over at its own 2-yard line with 4:03 remaining after Seahawks tight end Gerald Everett fumbled after catching a pass on third-and-goal. The 49ers drove to Seattle’s 3, but Jimmy Garoppolo’s fourth-down pass was deflected by Carlos Dunlap at the line of scrimmage to clinch the victory. Dunlap sacked Garoppolo for a safety early in the third quarter to tie the score at 23-all.

Wilson threw a 12-yard scoring strike to Tyler Lockett late in the third quarter to snap the tie. 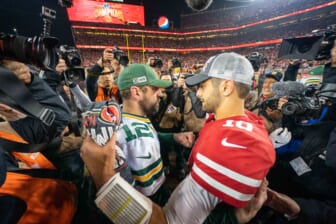 Wilson, who was intercepted once, also threw a 7-yard touchdown pass to Dee Eskridge and Travis Homer scored on a 73-yard run on the game’s opening possession.

The 49ers built a 17-7 lead early in the second quarter. Garoppolo hit Kittle with a 24-yard scoring strike one play after another fumble by Everett, Mitchell scored on a 2-yard run and Robbie Gould kicked a 50-yard field goal with 9:43 left in the half.

After Peterson plunged in from the 1, Kittle made a 48-yard touchdown reception to make it 23-14 as Gould’s extra point hit the right upright. Wilson hit Eskridge with 12 seconds left in the half to cut the 49ers’ lead to 23-21 at the intermission.

The Seahawks forced a turnover on the second-half kickoff, but Everett bobbled a pass at the goal line and it was intercepted by K’Waun Williams. Three plays later, Garoppolo was sacked in the end zone.

San Francisco’s Trenton Cannon was taken off the field in an ambulance after a collision on the opening kickoff. The team said he suffered a concussion and would remain overnight in a Seattle hospital.