Bruce Cassidy might be eyeing some changes to the Bruins’ lineup as Mathew Barzal and the Islanders look to seize on their momentum Monday night when Boston hosts New York for Game 5 of the East Division second-round playoff series.

Barzal batted in a flying puck for what proved to be the winning goal at 13:03 of the third period Saturday night in the Islanders’ 4-1 victory that tied the best-of-seven series at two games apiece.

Bruins coach Cassidy blamed his third line being out of position for Barzal’s deciding goal and said he is rethinking who he will roll out for Game 5. Boston’s third line of Nick Ritchie, Charlie Coyle and Jake DeBrusk also went scoreless in defeat.

“(The) third line didn’t generate much (on Saturday) — well, didn’t generate anything. To be honest with you, they’ve had better games,” Cassidy said Sunday. “Obviously a breakdown on the last goal. We didn’t do our job.”

Boston’s top line of Brad Marchand, Patrice Bergeron and David Pastrnak also were held without a goal in Game 4.

Marchand had an assist and Pastrnak, who whiffed on a wide-open net late in the first period, also logged a helper. Bergeron, who was named a finalist for the Selke Trophy for the 10th straight season on Sunday, did not record a point. 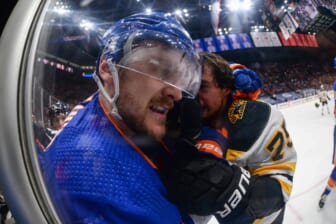 Defensemen Brandon Carlo (head injury) and Kevan Miller (upper body) will be game-day decisions for the Bruins after both missed Game 4. Carlo was injured on a hit in Game 3 and did not skate Sunday at the Bruins’ practice.

Boston and New York have alternated wins and losses in the series, with the Islanders responding after setbacks in Games 1 and 3 with victories in Games 2 and 4.

Islanders coach Barry Trotz credited team captain Anders Lee and his team’s veteran leadership for their ability to pick themselves up off the mat each time.

“You have to pick the right leaders so that they can get everybody to follow,” Trotz said Sunday. “To me, good leaders are an extension of the coaching staff, and I think we’ve got some good leaders. That’s where it starts.”

New York right wing Oliver Wahlstrom (lower body) did not play in Game 4, but will travel with the team for Game 5. However, Trotz said he did not anticipate making any lineup changes for the pivotal matchup in Boston.