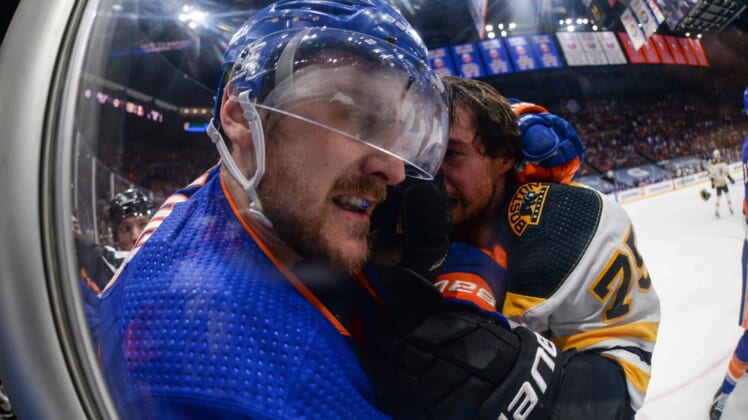 Mathew Barzal scored the tie-breaking goal with 6:57 left in the third period Saturday night for the New York Islanders, who beat the Boston Bruins 4-1 in Game 4 of an East Division second-round series in Uniondale, N.Y.

The Islanders evened the best-of-seven series at two games apiece, with Game 5 scheduled for Monday night in Boston.

A shot by Scott Mayfield bounced near the crease and to Barzal, who batted the puck out of the air and past Tuukka Rask.

Kyle Palmieri scored in the second period for the Islanders. Goalie Semyon Varlamov made 28 saves.

David Krejci scored in the second for the Bruins. Rask recorded 30 saves.

The teams traded punches and misfires on prime scoring chances during a scoreless first. 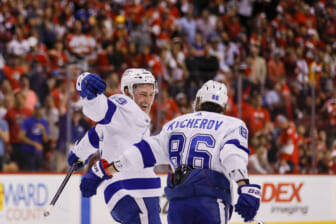 Mayfield and the Bruins’ Taylor Hall brawled at the 7:28 mark. Just under two minutes later, Barzal was whistled for a high stick on Curtis Lazar, which yielded a scrum that featured most of the players on the ice until Matt Martin and Jarred Tinordi fought and earned five-minute majors apiece. Several other minor fracases broke out the rest of the period.

Both teams squandered opportunities in the waning minutes. The Islanders’ Anthony Beauvillier shuffled the puck a beat too long and had his backhander at the door smothered by Rask with 5:04 left.

A little more than two minutes later, Varlamov was almost completely out of the crease as the puck bounced to David Pastrnak to the left of the net, but Pastrnak’s shot rang off the far post.

The teams then swapped goals in a span of under three minutes early in the second.

The Bruins, on a power play generated when Martin was whistled for holding, took the lead following a frantic sequence in the crease.

Pastrnak’s shot was deflected by Varlamov, and Brad Marchand took at least two whacks at putting back the rebound before the puck skittered to Krejci, who tucked a shot behind Islanders defenseman Andy Greene and into the far corner of the net at the 3:57 mark.

Barzal, pestered along the right side of the Bruins zone by Lazar, finally broke free and headed behind the net, where he sent a pass beyond the outstretched stick of Matt Grzelcyk and to Palmieri. The Long Island native, positioned between Lazar and Charlie Coyle, fired a shot under Rask’s stick.