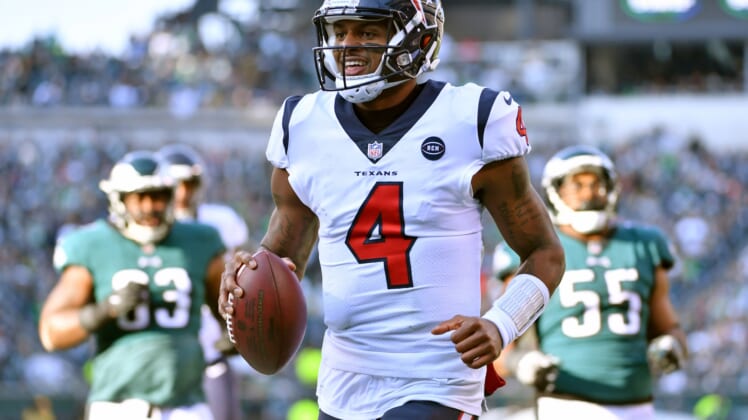 A multitude of NFL teams have been linked to Deshaun Watson as the Houston Texans quarterback longs for a trade, but the Philadelphia Eagles are a new suitor gaining momentum of late.

After dumping Carson Wentz and eating $33.8 million in dead money to trade him to the Indianapolis Colts, the latest NFL rumors suggest Philadelphia may not settle on sophomore second-round pick Jalen Hurts as its signal-caller.

Jason La Canfora of CBSSports.com reported on what he’s hearing out of Philly, and it’s utterly fascinating as the team’s chaotic offseason continues:

“Do not discount the Philadelphia Eagles as a strong suitor for Deshaun Watson. Too many sources with ties to ownership have whispered that sentiment my way for me to ignore. […] It is indisputable that the Eagles are monitoring the Watson situation closely and evaluating it. No one in that organization would deny that.”

The Eagles have paid for so many veteran players, and it’s cost them a lot against the salary cap, which is smaller in 2021 than it’s been in the past.

Having said that, Philadelphia is actually not in too bad of shape to acquire Watson. Houston would lose $5.66 million in cap space if it traded the reigning NFL passing champion prior to June 1, and Watson’s base salary is only $10.54 million for 2021.

By sending back multiple players in a prospective deal, along with the inevitable draft picks that would be included as part of the transaction, the Eagles could have a legitimate chance to get Watson as their new long-term QB after the Wentz debacle.

Speculation is swirling that a Watson trade could be imminent since the Texans signed journeyman field general Tyrod Taylor in free agency.

It’s very possible that Ertz is traded prior to any timeline the Texans would be on to trade Watson, because they’ve been pretty steadfast about their insistence on keeping him even if he refuses to suit up.

On the other hand, Ertz isn’t a devastating salary cap hit, and Philadelphia should hold onto him as long as possible, especially if it means he can be a valuable asset to contribute to a Watson trade package.

The cost of two first-round picks and a second-rounder is quite a bargain on its own. Ertz obviously wants out from the Eagles, and the team has plenty of depth on the defensive front to afford losing Barnett. Trading those two would save Philadelphia $15 million in cap space, per Over the Cap.

Poor Jalen Hurts, though. He dealt with a quarterback controversy at Alabama and was ultimately benched for Tua Tagovailoa. He transferred to Oklahoma, won a QB competition despite limited time to prepare, and balled out in his final college season. Then, he enters the NFL into the mess of a situation with the Eagles and Wentz.

It’s also possible Philly could use its sixth overall pick in the 2021 NFL Draft to take a QB, which would further spoil the start of Hurts’ NFL career. However, a fresh start in Houston with Taylor as his mentor could be a better situation — provided the Texans wouldn’t take the Iggles’ top pick and draft a new young quarterback of their own.

Any scenario that results in the Eagles landing Watson would definitely make the fanbase happy. As long as a trade package similar to the one we’ve proposed is on the table and much of the team’s core remains intact, Watson would make Philadelphia the immediate favorite to win the wide-open NFC East division.