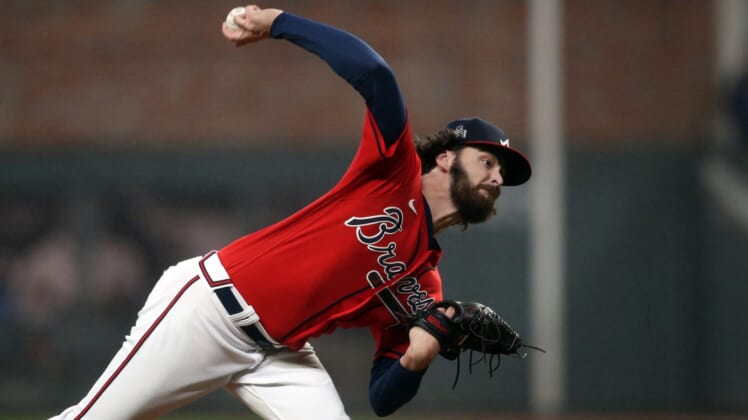 A day after going against the Braves’ 2017 first-round draft pick, the San Diego Padres will hope for a better outcome against Atlanta’s top selection from a year earlier.

The Braves pulled away to win 5-2 on Friday after starter Kyle Wright, the fifth player taken in 2017, struck out nine over five innings, allowing two runs and five hits.

While Anderson was working his way up through the Braves’ system, Martinez was pitching in Japan for parts of four seasons. And while Anderson was struggling in his first 2022 start, Martinez was limiting the San Francisco Giants to one run on five hits and a walk with six strikeouts in his five-inning debut with the Padres on Monday.

Anderson posted a 9-5 record with a 3.58 ERA and 1.231 WHIP in 24 starts for the Braves last season. However, in his first start this season, on Sunday against the Cincinnati Reds, Anderson gave up five runs on three hits and five walks with one strikeout in just 2 2/3 innings. The walks matched his career high.

“I felt I was battling myself all game,” he said. “I couldn’t make the adjustments I needed to make.”

Anderson, 23, pitched only eight innings during spring training and missed his last scheduled exhibition appearance due to a blister on his toe.

“Ian’s going to get better as he goes,” Braves manager Brian Snitker said after the outing against Cincinnati. “He’s going to get his rhythm. And when he does that, his command will be better.”

Anderson has never faced the Padres.

“I remember Nick with the Rangers,” said Melvin, who was managing the Oakland A’s at the time. “Everything is a bit sharper to him now. Maybe there’s a bit more velocity, too. He’s more confident. I think that comes with having success, and he had success in Japan. That showed as soon as he joined us in spring training.”

The Padres signed Martinez as a free agent in mid-March as either a starter or a middle reliever. Martinez earned the No. 4 spot in the rotation with a strong spring training, giving up four runs on eight hits and three walks with 14 strikeouts in 12 innings for a 3.00 ERA.

Martinez has made one appearance against the Braves in his career, pitching two shutout innings in relief in a win for the Rangers at Atlanta in 2017.

The Braves and Padres have split the first two games of a four-game series.

Second baseman Ozzie Albies has homered for Atlanta in both games and in three of the Braves’ past four contests.

Padres third baseman Manny Machado went 3-for-4 with an RBI double Friday after going 5-for-6 with a two-run homer Thursday — making him 8-for-10 in the first two games of the series with a double, a home run, three RBIs, two stolen bases and four runs.