Atlanta Braves’ Ronald Acuña Jr. closing in on a return from knee injury 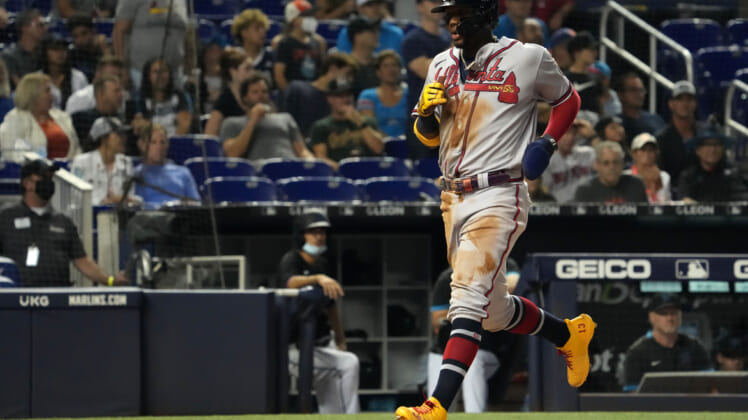 Atlanta Braves outfielder Ronald Acuña Jr. is reportedly taking another crucial step towards a return and he could rejoin the lineup within weeks following his recovery from a torn ACL.

Acuña Jr. tore his ACL in the outfield on July 10, 2021 against the Miami Marlins. It was a devastating blow for the Braves’ lineup, causing the front office to acquire outfielders Adam Duvall and Jorge Soler before the MLB trade deadline. Months later, they won the World Series.

The Braves knew Acuña Jr. would miss the start of the 2022 MLB season. Already on the 10-day injured list for his recovery from ACL surgery, the 24-year-old outfielder could reportedly be on the verge of returning to game action.

According to Justin Toscano of the Atlanta Journal-Constitution, Acuña Jr. took part in simulated games this week. If the All-Star slugger feels good during his recovery this weekend, he could be cleared to begin a rehab assignment next week.

When will Ronald Acuña Jr. return to Braves’ lineup?

This likely won’t be a brief rehab assignment for Ronald Acuña Jr. Atlanta is going to exercise caution with the star it signed to an eight-year, $100 million contract extension. Additionally, the organization must also account for the right-handed hitter missing spring training.

Realistically, the Braves could assign Acuña Jr. to either the Low-A Augusta GreenJackets or the High-A Rome Braves. He would likely play a few games for either club, serving as the designated hitter and only playing a few innings.

If he avoids any setbacks, Acuña Jr. could then join the Triple-A Gwinnett Stripers within the next two weeks. Assuming he is making a full recovery from his injury, Atlanta can allow him to play full games with limited reps in the outfield.

One important thing to note, the Braves are bringing Acuña Jr. back as a designated hitter when he’s activated from the injured list. The tentative plan, assuming he returns in late April, will be to take advantage of the universal DH.

In the best-case scenario, Acuña Jr. will return to the outfield in May. One thing to keep in mind, the Braves’ outfield depth allows them to ease him along early in the 2022 season. Additionally, he likely won’t steal as many bases in his first season back from the torn ACL.