The Ohio State Buckeyes held a quarterback competition this spring in their effort to replace Justin Fields, and C.J. Stroud emerged as the clear winner. Now, the latest college football betting numbers suggest Stroud could be in for a Heisman Trophy-caliber 2021 season.

ESPN.com betting guru David Purdum gathered data from Caesars Sportsbook, and published a report on Wednesday that revealed Stroud as second only to Oklahoma QB Spencer Rattler in most money wagered and total bets on who’ll win the Heisman Trophy.

In terms of sheer value, it’s hard to argue against backing Stroud. Sportsnaut’s own Heisman Watch logs the latest lines from DraftKings, but Caesars has the same odds for the front-runner Rattler (+600).

That’s a decent bargain for someone of Rattler’s caliber, considering he hails from a Sooners program that’s recently produced Heisman winners and eventual No. 1 overall NFL Draft picks in Baker Mayfield and Kyler Murray. Combining Lincoln Riley’s offensive schemes with Rattler entering Year 2 in Oklahoma’s system is a perfect storm.

Having said that, Stroud’s odds are all the way up to +1400. Thus, a bettor could wager the same amount of money on Rattler and Stroud to hedge, and if the latter won, it’d be more than double the payout. 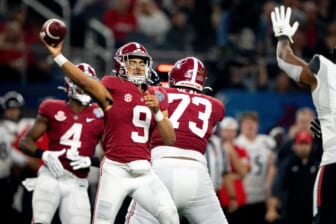 There’s no shortage of hype surrounding Stroud. The only real drawback is almost nonexistent sample size. Expectations come with the territory in Columbus, and Stroud has seen firsthand from Fields how to handle them.

Stroud was 247Sports’ No. 2 pro-style QB in the 2020 class, trailing only Clemson star D.J. Uiagalelei, so on his own merits, the new Buckeyes signal-caller is a fascinating unknown who’s built more of a reputation on his passing prowess.

However, in his only legitimate game action as a true freshman in 2020, Stroud ran the ball 48 yards for a touchdown against Michigan State. Not a bad first impression.