We’ve read rumors that the Toronto Raptors could look to pull off an OG Anunoby trade this summer. The ascending forward is reportedly not happy with his role up north with reigning NBA Rookie of the Year Scottie Barnes starring in the frontcourt.

For a Raptors team that also boasts All-Star Pascal Siakam in the frontcourt, it might make sense to move of Anunoby while he holds a tremendous amount of trade value.

According to this report fom Chris Haynes of Yahoo! Sports, the Portland Trail Blazers are “in pursuit” of Anunoby and could offer up a nice bounty to Toronto in return.

This report comes immediately after new Blazers general manager Joe Cronin acquired Jerami Grant in a blockbuster trade with the Detroit Pistons on the eve of the 2022 NBA Draft. Portland utilized the trade exception it acquired in the C.J. McCollum deal from back in Februry to bring Grant aboard — meaning it still has the fifth-most cap room in the NBA.

Anunoby’s $17.3 million salary for next season is seen as team-friendly. Given his performance for the Raptors last season, it will cost a premium to acquire the star young forward in a trade.

According to the Haynes’ report, Portland is willing to offer up the seventh selection to Toronto. That would pretty much be the centerpiece heading to the Raptors in said deal.

However, they could add even more assets by taking on Eric Bledsoe’s non-guaranteed $19.3 million salary for next season. Someone like former Los Angeles Clippers first-round pick Keon Johnson could be that sweetener.

This would give front office head Masai Ujiri even more flexibility to add complementary talent too team up with Siakam, Barnes and Fred VanVleet. Toronto is said to be in on Utah Jazz star center Rudy Gobert. These assets could lead to a trade of that ilk.

As for Portland, it’s rather clear that Cronin is looking to build an instant contender around franchise cornerstone Damian Lillard. Adding Grant to the mix was the first step. It will not be the final step. 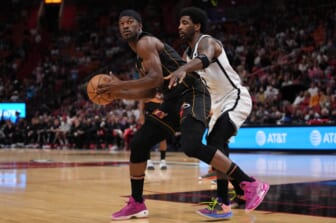 As noted above, Toronto could flip these assets for a proven big. It could also decide to continue going young after selecting Barnes last summer. The seventh pick could bring in a premium players such as Kentucky guard Shaedon Sharpe or big man Jalen Duren from Memphis.

From Portland’s perspective, acquiring Anunoby to team up with Lillard, Grant and youngster Anfernee Simons would make this a legitimate playoff team out west.