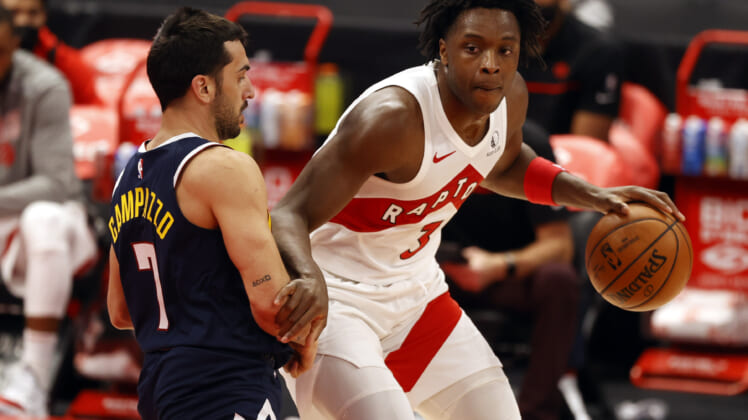 There’s been increased chatter of the Toronto Raptors pulling off an OG Anunoby trade this summer after a first-round exit in the NBA Playoffs.

Some reports indicate that Anunoby is not happy with his role in Toronto with the team increasingly focused on reigning NBA Rookie of the Year Scottie Barnes as a frontcourt centerpice.

Meanwhile, the Raptors plan to add a big man to help create a more-balanced roster for next season. As one of the better and most-underrated youngsters in the NBA, Anunoby would be a valuable trade chip.

A three-and-D wing in the truest sense of the term, several teams will have interest in Anunoby should he hit the trade market. According to Matt Moore of the Action Network, that includes the Denver Nuggets out west.

This also can’t be seen as too much of a surprise. Denver is coming off an injury-plagued 2021-22 season that saw star point guard Jamal Murray miss the entire campaign with Michael Porter Jr. playing in only a handful of games.

Denver ended up losing to the Golden State Warriors in the first round of the playoffs despite Nikola Jokic earning his second consecutive NBA MVP award. New front office head Calvin Booth is expected to be active in finding upgrades behind Jokic on the roster. Anunoby would make a lot of sense. Here’s how a deal might come together.

OG Anunoby trade to the Denver Nuggets in three-team swap

The first thing that must be noted here is the fact that Toronto is among those interested in acquiring Gobert from the Jazz. He’s said to be on the trade block. At issue here is Gobert’s bloated contract. That could impact Utah from a value standpoint as front office heads Justin Zanik and Danny Ainge navigate through what promises to be an interesting summer.

Simply put, Gobert’s trade value is not as high as some might think. After all, the 29-year-old is set to count $46.66 million against the cap in 2025-26. If that’s the case, Utah makes for a good partner in a potential OG Anunoby trade. It gets a solid two-way forward in Gordon as well as a potential 20-point scorer to team up with Donovan Mitchell in the backcourt. The Jazz also add a future first-round pick from Denver.

As for the Nuggets, any deal to acquire Anunoby would be pretty darn expenive. In this scenario, they send out two first-round picks and a core player in Gordon to find Jokic more help. A core four of Murray, Jokic, Porter Jr. and Anunoby would have conference title contention written all over it.

From Toronto’s perspective, it wants to add more size too the mix to go with Fred VanVleet, Scottie Barnes and Pascal Siakam. While creating a hole at the two-guard spot, this would do just that. Front office head Masai Ujiri would then look to the mid-level exception or another trade to fill the void left by Trent Jr.

There’s also a scenario in play that suggests the Raptors and Nuggets could pull off a two-team trade. In this hypothetical, Aaron Gordon and stud young guard Bones Hyland head to Toronto. Though, that might be a bit too much for the Nuggets to pay given Hyland’s performance as a rookie.